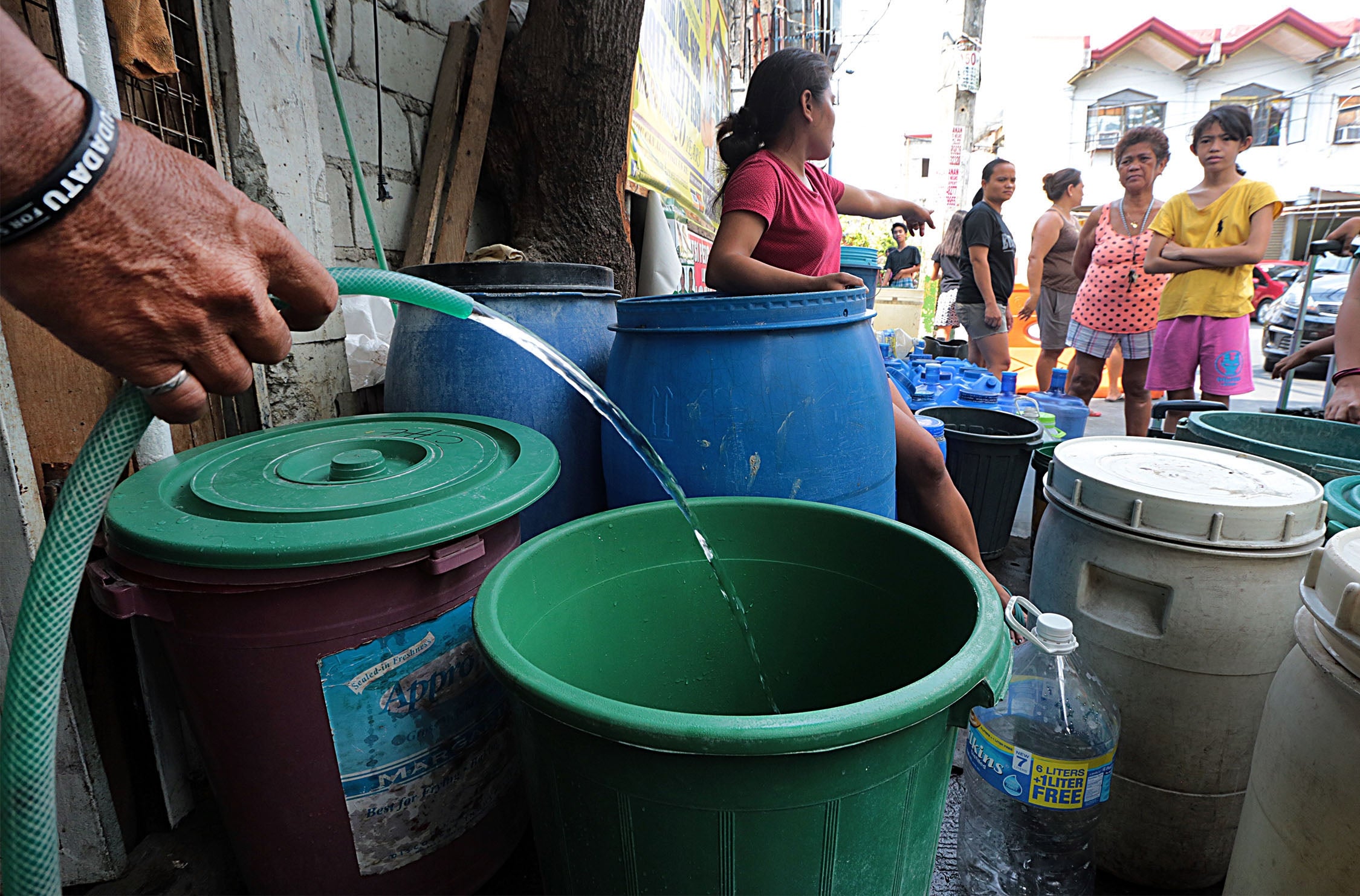 PRECIOUS FLOW Metro Manila residents have been reeling from the water shortage for the past several weeks as the reserve in Angat Dam in Bulacan province dipped to precarious levels because of lack of rain. —GRIG C. MONTEGRANDE

MANILA, Philippines — Harsher penalties must be imposed on the water concessionaires because the shortage in Metro Manila is due to their incompetence and greed, Gabriela Rep. Arlene Brosas said on Wednesday.

Brosas dismissed the claim of Maynilad Water Services Inc. and Manila Water Co. Inc. that the shortage was due to “force majeure,” or an uncontrollable event, as just an alibi.

“The MWSS (Metropolitan Waterworks and Sewerage System) as the regulating body should not buy the alibi of the two private water concessionaires in their attempt to escape liability [for] the suffering of waterless households,” Brosas said in a statement.

The MWSS was expected to tackle the concessionaires’ force majeure petition on Wednesday as the regulator opened an inquiry into service interruptions that had been inconveniencing Metro Manilans since March.

Taps in the east zone of the metropolis went dry in March when the reserve in La Mesa Dam dropped below the critical level, catching the concessionaire in the area, Manila Water, unprepared.

The MWSS fined Manila Water P534 million for failing to provide 24-hour service to its customers for 15 days. The fine came in the form of a rebate to customers, reflected on their bills for June.

This time, Brosas wants Maynilad penalized as well, because the shortage has extended to the west zone of the metropolis, and that the penalties be heavier than the fine slapped on Manila Water for its March failure.

“The rebates should be doubled or even tripled in the coming months until such time that water supply is brought back to normal levels,” she said.

The reserve in Angat Dam in Bulacan province, which supplies 97 percent of Metro Manila’s water needs, has been dipping to precarious levels in recent days because of the lack of rain.

At a hearing in the House of Representatives on Tuesday, National Water Resources Board Executive Director Sevillo David warned that the Angat stock might drop again to its lowest mark of 157 meters above sea level (masl) this weekend, meaning longer service interruptions in Metro Manila.

As of Wednesday morning, the Angat reserve stood at 158.37 masl, way below the minimum operating level of 180 masl.

Brosas said the contracts of Manila Water and Maynilad let them off only in times of war, drought or severe calamities.

She said the current crisis should not be used to push for the construction of the China-financed Kaliwa Dam in Quezon province.

“This is an obvious maneuver by the MWSS to justify the supposed need for the Kaliwa Dam to solve the water crisis. But are we not surprised that [the] government is announcing the water shortage at Angat Dam despite the construction of several treatment plants and the onset of the rainy season?” Brosas said.

She said the privatization of the water service in the metropolis should be reversed by the government by taking over Maynilad and Manila Water.

The militant group Bayan Muna has also called for “renationalization” of the water service, which Malacañang has said is an option for the government in the search for solutions to the water woes of the metropolis.