HONG KONG – Protesters In Hong Kong opposed to contentious extradition legislation are calling on leaders of the U.S., the European Union and others to raise the issue with Chinese President Xi Jinping at this week’s G-20 summit in Japan. 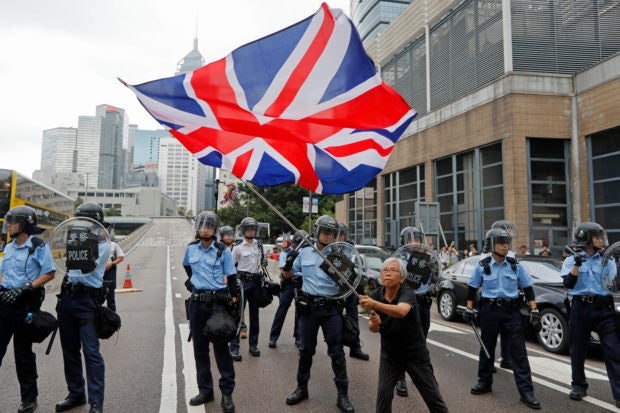 In this Wednesday, June 12, 2019, photo, a woman waves a British flag as policemen in anti-riot gear stand guard against the protesters on a closed-off road near the Legislative Council in Hong Kong. China promised that for 50 years after Britain gave up control of its last colony in 1997, this shimmering financial enclave would get to keep freedoms absent in the communist-ruled mainland that many here don’t want to live without. (AP Photo/Kin Cheung)

Groups of protesters gathered outside the U.S. and EU consulates Wednesday morning to deliver petitions stating their requests.

A spokesman says changes to the Chinese territory’s legislation could expose citizens of all nationalities to being extradited to China for unfair trials and possible torture.

Hundreds of thousands of people have protested in recent weeks over the legislation and police violence against them.

China has said it won’t permit any discussion of Hong Kong affairs at the meeting in Osaka. /gsg