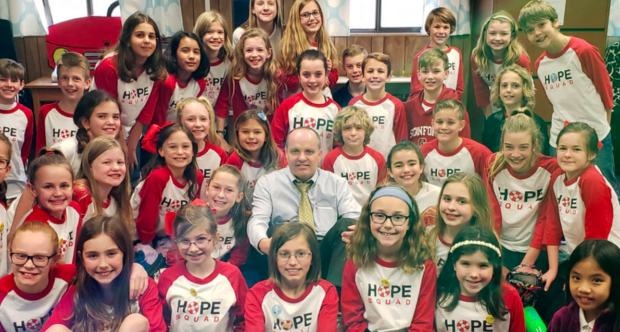 When Greg Hudnall decided to dedicate his life to suicide prevention, he probably did not think he would be training over thousands of students for the cause.

Hudnall, founder and executive director of HOPE4UTAH, made the decision when one of his students committed suicide in 1997, as per People on June 21.

“That’s when I told myself, ‘I’m done. I can’t take any more of this,’” Hudnall said of his student’s death in the report. “I vowed that I would do everything I could to prevent it from ever happening again.”

Since then, Hudnall has created a network of student-mentors in schools around the United States to raise awareness on mental health: Hope Squads.

Hope Squads, as per HOPE4UTAH’s website, are the eyes and ears of a student’s school. These squads are led by students who are trained to look over at-risk-students by providing friendship, identifying warning signs and seeking help from adults.

“HOPE4UTAH works with school advisors to train students who have been identified by their classmates as trustworthy peers to serve as Hope Squad members,” as per the organization. “Through evidence-based training modules, Hope Squad members are empowered to seek help and save a life.”

By working together, Hope Squads aim to enhance the health and safety measures already in place at a school. They are taught not to act as counselors, but are instead educated on how to recognize signs of suicide contemplation among peers and how to respectfully report this to adults.

There are over 5,000 Hope Squad members and more than 2,800 students referred for help, thus far.

As per Hudnall, seven out of 10 young people who commit suicide will tell a friend, and not an adult, beforehand. This was what happened to his student who killed himself in a park with a handgun in 1997.

“And that friend will never tell anybody. That’s what happened with the young man I was asked to identify in the park,” said Hudnall. “He told five people what he was going to do in the days leading up to his death.”

This is the reason why Tyelle Gustofson, an 18-year-old recent graduate of Utah’s Mountain View High School, decided to contact a school counselor last December 2018 when a friend of his told his group that he was planning to kill himself.

“My friends all wanted to help, but didn’t know how,” Gustofson said in the report. “Because of Hope Squad I knew it was something I had to act on quickly. But it was scary because I knew my friend, who has a violent temper, would be furious. But I decided I’d rather have a friend who was angry at me than one who is no longer here.”

Today, Gustofson’s friend is getting the support he needs by undergoing counseling. Gustofson added that his friend recently thanked him for reaching out to a counselor for help: “I can’t think of anything better than that.” Cody Cepeda/JB