UP finds humane way to deal with strays on campus 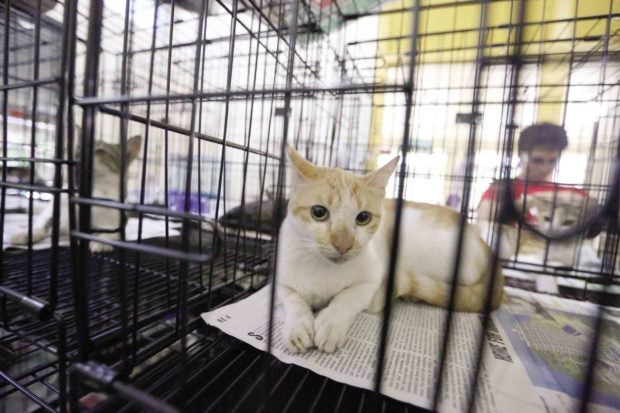 POPULATION CONTROL A cat awaits spaying as part of a program to reduce the number of unwanted animals on the UP Diliman campus. —NIÑO JESUS ORBETA

MANILA, Philippines — Animal welfare groups and volunteers have joined hands to spay or neuter at least 70 percent of the stray dogs and cats found on the sprawling campus of the University of the Philippines in Diliman, Quezon City.

The Animal Kingdom Foundation (AKF) and UP Friends of Campus Animals (Foca) conducted on Sunday a mass spaying and neutering to help control the population of the stray animals in the university.

The surgical procedures to be performed on around 700 dogs and cats in UP Diliman over three more Sundays are expected to lengthen their life expectancies and reduce the number of unwanted animals which often end up being abused or abandoned.

“We feel that UP, as the primary state university, should step up and be a model of responsible pet ownership,” said Heidi Caguioa, AKF program manager, who added that they envisioned an animal-friendly campus that other colleges and universities would strive to emulate.

She added that to facilitate the process, AKF relied on an army of campus volunteers who spent the week catching the dogs and cats and keeping them in a residence on campus until the mass spaying/neutering.

“It’s a good example of ‘bayanihan,’” she said, referring to the age-old custom of working together in a community.

Before being returned to the campus grounds, dogs would be given a blue collar to indicate they had been spayed/neutered and vaccinated. Due to the difficulties a collar could pose to cats, a mark would be put on their ears instead.

According to Caguioa, they signed a memorandum of agreement with UP Foca last year, pledging their assistance for animal welfare programs in UP Diliman.

The idea behind the mass spaying/neutering, she said, was to present a safe and effective alternative to the ways other universities had handled stray animals, with cats and dogs often impounded and later killed.

The initiative also rested on a basic tenet—that the strays were an integral part of the UP Diliman campus with an important role to play in its vibrant ecosystem.

“They really become campus pets,” Caguioa said. “They’re part of the community, they live among us.”

Having these cats and dogs roaming the campus allows students a unique form of support and relief complemented by other efforts, including an initiative under which emotional support dogs are made available to students and university staff experiencing depression or anxiety.