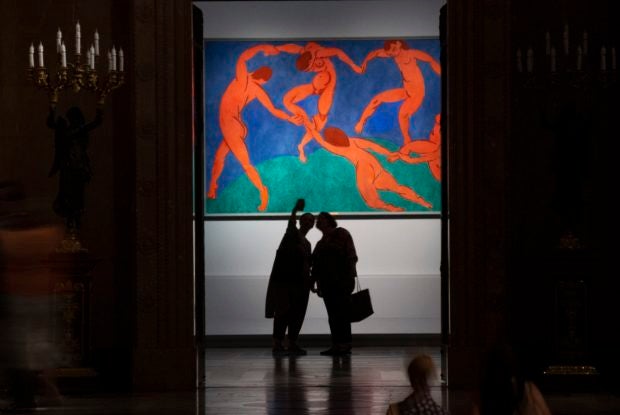 Visitors look at the Dance by Henri Matisse the collections of Sergei Shchukin, one of the most prominent collections of European Modernist art, encompassing the most important artistic trends of the late 19th and early 20th centuries at The Pushkin State Museum of Fine Arts in Moscow, Russia. Image: AP/Alexander Zemlianichenko

The treasures hail from the early 20th-century collection of Russian businessman Sergei Shchukin, whose collection was confiscated and then divided up by the Soviet state.

The exhibition unites works from the Pushkin, Hermitage and other museums in what is arguably the most complete version of his collection, offering viewers the chance to see it as Shchukin himself conceived it.

The exhibition called “Shchukin. Biography of a collection” brings together works amassed by the Russian cloth magnate and his brothers on numerous trips they made to Paris before the 1917 Bolshevik Revolution.

Shchukin showed his collection at his own home in Moscow, displaying works that were radically new at the time. He didn’t care what public opinion thought and pursued pieces that even he sometimes found hard to appreciate, but which he thought were compelling and important. 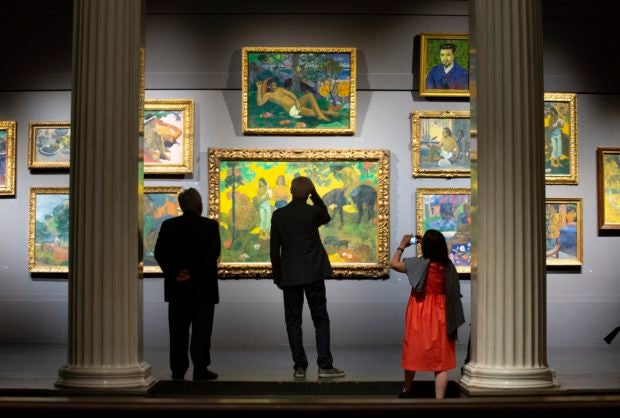 Visitors look at a painting by Paul Gauguin and Vincent van Gogh of the collections of Sergei Shchukin, one of the most prominent collections of European Modernist art. Image: AP/Alexander Zemlianichenko

“Shchukin was prepared for a lack of understanding from society, this was total, not just his own business milieu but the art community, critics and excellent Russian artists, who did not accept Matisse or cubist Picasso,” Pushkin Director Marina Loshak told Associated Press. “He did all this knowingly, he expected such reaction and he was delighted by it.”

Loshak sees Shchukin as a pioneer who influenced the course of 20th-century art history.

He bought Gaugin, Matisse, the French Impressionists and Picasso when these artists were deeply unfashionable in Europe. But the array of priceless masterpieces now hanging throughout the Pushkin, including Matisse’s renowned “Dance”, is a testament to his unique taste and personal conviction.

“Shchukin wanted to be first, to discover things first and show them to the world and to create a new history,” Loshak said.

She described Shchukin as one of the great art collectors, in a Russian tradition which includes banker Pavel Tretyakov (whose Russian art collection fills Moscow’s Tretyakov State Gallery).

“It is hard to find someone who collects contemporary art in this way, with such passion and making it their life’s object, these kinds of people are few, but they existed in Russia,” Loshak said.

“Shchukin. Biography of a Collection” and a parallel exhibition of contemporary art from the private collection of Foundation Louis Vuitton runs from June 19 to Sept. 15 at the Pushkin State Museum of Fine Arts in Moscow. HM/NVG