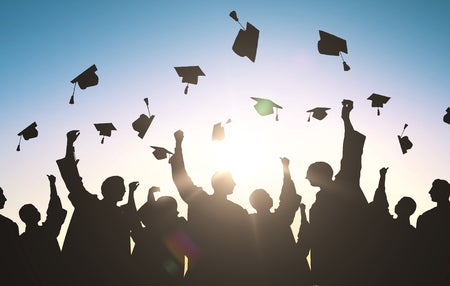 A 96-year-old veteran of World War II graduated from high school, at last, after missing his ceremony over 70 years ago.

William C. Wagner was about to finish high school at Tilden High School when he was tasked to serve at the Second World War in 1944, as reported by ABC’s WLS-TV on June 14. He joined the United States Navy on June 12, 1943.

“I was in [the] last half of my senior year,” Wagner was quoted as saying. “They told me to take history and civics to get my diploma. I went to draft board and they said, ‘Punk you got a number, you got to go.’”

Wagner worked at the kitchen onboard the USS Yosemite which provided support to ships bombed at Pearl Harbor.

“How awesome is that for a young teenager to sit back and put his country before his own wants and needs,” Forrest Wagner, the veteran’s son, said in the report. “What he sacrificed for me and my brothers and sisters, and then also for his country, I believe I will never be able to repay.”

Wagner’s son made arrangements for his father’s high school diploma which was delivered in March. It ended up being the veteran’s present since it arrived a day before his 94th birthday.

“My birthday [was] March 7th. It was really great that I got my diploma. He had a cap for me and everything else,” Wagner recalled.

Wagner officially graduated with the class of 2019 although he is a member of the class of 1944. Hannah Mallorca/JB