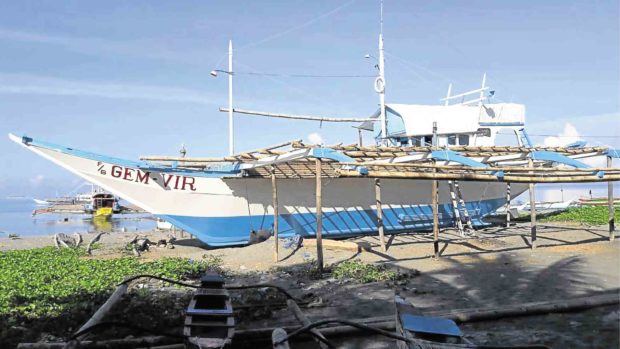 THEY LOST EVERYTHING The fishing boat Gem-Vir 1, shown at home in San Jose, Occidental Mindoro, in this file photo, was anchored at Recto Bank in the South China Sea when it was hit by a Chinese vessel on Sunday night. It sank but the crew survived, although, according to the boat owner, they lost their catch and everything else on the boat. —CONTRIBUTED PHOTO

MANILA, Philippines — An opposition lawmaker in the House of Representatives said it is no longer surprising that Junel Insigne, the captain of the Filipino boat rammed by a Chinese vessel in the West Philippine Sea, seemed to have changed his tune after meeting Agriculture Secretary Emmanuel “Manny” Piñol on Wednesday.

Bayan Muna Rep. Carlos Zarate believes that Insigne and his crew were already “pressured” and “threatened” by the administration through Piñol, who visited them in Occidental Mindoro and gave them new fishing boats and financial aid.

“It’s not surprising na ‘yung mga statement ng ating mga biktima, mga mangingisda ay nagbago… There was really pressure, they were bombarded by so much misinformation… siguro may mga pagbabanta and overall bina-bribe sila…” Zarate said during Thursday’s weekly press briefing of the progressive Makabayan bloc in the chamber.

Gabriela Rep. Arlene Brosas for her part echoed the demand for accountability of the 22 Filipino fishermen who had been abandoned by the Chinese crew.

Kabataan Rep. Sarah Elago said the ramming incident and the administration’s inaction on it should spark collective action from the public.

In a separate statement, Misamis Oriental 2nd District Rep. Juliette Uy called for sobriety among all parties directly involved in the incident, saying they should let the Philippine Coast Guard (PCG) do its investigation.

“The Philippine Coast Guard has started its work on the case. I believe all the national authorities must respect the jurisdiction of the PCG on this, so they should all step back to let PCG do its work well,” Uy said.

Del Rosario: Then and now, China can’t be trusted