As Hong Kong protests quiet down, what’s next? 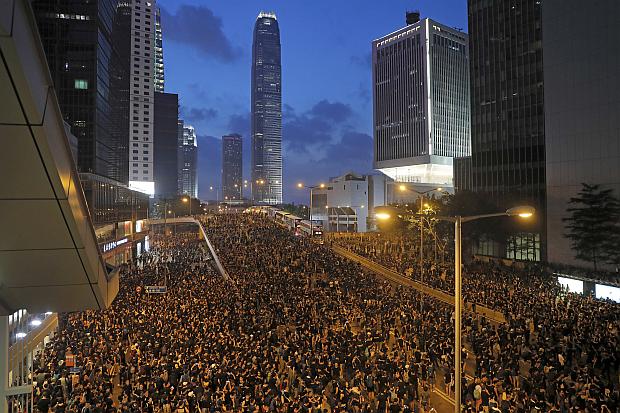 In this photo, taken Sunday, June 16, 2019, tens of thousands of protesters march on the main road near the Legislative Council to protest against the unpopular extradition bill in Hong Kong. All but a handful of protesters in Hong Kong have gone home, but the crisis that brought nearly two million into the streets to oppose the extradition bill is far from over. (Photo by KIN CHEUNG / AP)

HONG KONG — All but a handful of protesters in Hong Kong have gone home, but the crisis that brought hundreds of thousands into the streets to oppose an extradition bill is far from over.

The way forward for both Hong Kong Chief Executive Carrie Lam and her opponents is uncertain because of the limits built into the city’s “one country, two systems” arrangement with Beijing after Britain ceded control of the former colony in 1997.

The public is wary of seeing Communist Party-ruled Beijing wield still greater influence that would imperil civil liberties such as independent courts and the freedom to speak out against the local government, privileges not enjoyed in the mainland. Officials in Beijing back the unpopular extradition legislation. Lam is stuck in the middle.

A look at some possibilities for the key players in this drama.

Many analysts expect Lam will eventually step down to take responsibility for the mess resulting from her effort to fast-track the extradition bill, which would allow some suspects in Hong Kong to be tried in mainland Chinese courts.

On Tuesday, she apologized and said she needed to do better, but also insisted she wants to finish her 5-year term.

Too abrupt a departure by the Beijing-appointed career bureaucrat would be a loss of face for China’s leadership.

If her opponents keep up the pressure and she does leave, she might opt to spend more time with her husband and children, who are British citizens and live elsewhere.

The various pro-democracy groups that helped drive and organize the protests are pushing for Lam’s resignation and the permanent scrapping of what they call the “evil” extradition bill.

Differences over strategy have emerged, but the groups dismissed Lam’s latest apology, saying she failed to respond to their demands.

Some vowed to stage acts of resistance, perhaps using measures such as delaying subway trains, if their demands are not met by Thursday evening.

But the protests have dwindled from the masses that turned out on Sunday to a handful of die-hard demonstrators.

They could resume, especially on the July 1 anniversary of Hong Kong’s handover to China.

At a late-night news conference on Monday, Hong Kong Police Commissioner Stephen Lo Wai-Chung sought to soothe anger over the use of forceful measures during clashes with protesters on June 12.

He said only five of 32 people arrested in or around the protests were accused of rioting, a serious charge that can result in a prison term of up to 10 years.

Local lawmakers were due to question the city’s secretary for security on Wednesday, and some are calling for an independent inquiry into complaints that police tactics were too aggressive.

The proposed changes to Hong Kong law would expand the scope of transfers of criminal suspects to include mainland China, Taiwan, and Macau.

Lam said the legislation is needed to prevent Hong Kong from becoming a haven for fugitives and improve the ability to fight crimes including money laundering.

China has been excluded from Hong Kong’s extradition agreements because of concerns over the independence of its courts and its human rights record.

Since Lam has bowed to public pressure in shelving the bill indefinitely, it’s unlikely to become law anytime soon.

The leaders in Beijing

China promised when it took control of Hong Kong from Britain to allow it to keep its civil liberties and independent legal system for 50 years.

That special status has been compromised in a number of cases.

Prosecutions of activists, detentions without trial of five Hong Kong book publishers and the illegal seizure in Hong Kong by mainland agents of at least one mainland businessman are among moves in recent years that have unnerved many in the city of 7 million.

Beijing backed the extradition bill and said it fully supported Lam. It appears to have now bowed to public pressure.

But analysts say both Lam and China are playing a game of “attrition,” betting that protesters will eventually grow weary of their struggle for greater democracy in a former colony that has never fully determined its own future.