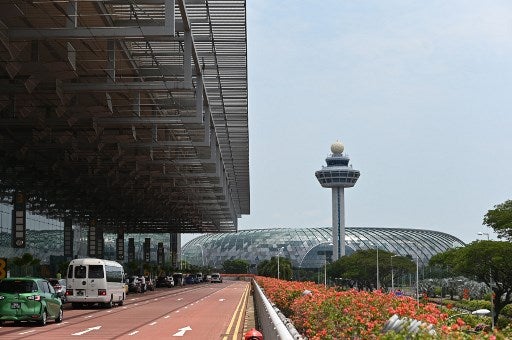 The control tower of Changi International Airport in Singapore is seen on March 12, 2019 with the departure terminal at left and the newly constructed Jewel Changi Airport, a doughnut-shaped structure in the background. AP

SINGAPORE, Singapore — Singapore’s main airport temporarily closed a runway after drones were spotted in the area, causing dozens of flights to be delayed, authorities said Wednesday.

It is the latest case of unmanned aerial devices causing disruption at a major airport after thousands of passengers were affected when drone sightings forced the closure of Britain’s Gatwick Airport last year.

Changi Airport, one of Asia’s busiest hubs, closed one of its two runways for short periods from late Tuesday into early Wednesday after the drone sightings, the Civil Aviation Authority of Singapore said.

About 37 flights were delayed and one arriving in Singapore was diverted to neighboring Malaysia, the agency said.
Authorities have launched an investigation.

It is against the law in Singapore to fly a drone within five kilometers of an airport without a permit, the Straits Times newspaper reported.

Anyone convicted of breaking the regulation faces up to a year in jail. /ee