CIUDAD HIDALGO, Mexico – Mexico’s efforts to slow Central American migration across its territory showed some bite Monday as some people turned around to head south in the face of increased enforcement, while government officials said they would target human smuggling rings.

One government official announced Monday that the 6,000 National Guard members who officials had repeatedly said would be sent to the southern border will actually be distributed across the northern border and other areas as well, while another suggested measures were showing results. 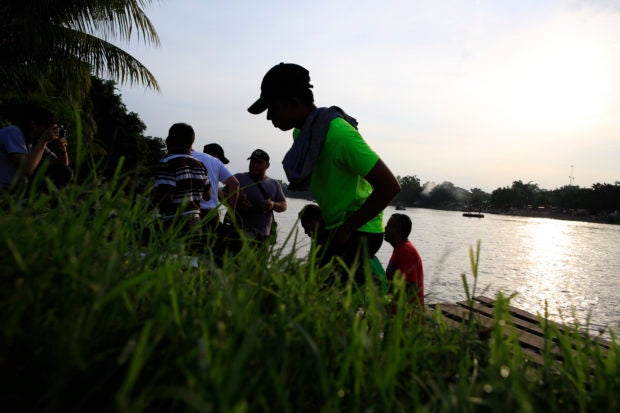 People arriving from Guatemala disembark from a raft at “Coyote Pass” in Ciudad Hidalgo, Mexico, Monday, June 17, 2019. Mexico is increasing immigration enforcement near the southern border amid heightened pressure from the U.S. to reduce the surge of mostly Central American migrants through its territory. (AP Photo/Rebecca Blackwell)

A senior Mexican official, who requested anonymity to discuss negotiations with the U.S., said that three weeks ago about 4,200 migrants were arriving at the U.S. border daily and that now that number has dropped to about 2,600 per day.

The official warned it was too early to draw conclusions from such a small window, but that Mexico was optimistic its measures would work.

On the Suchiate river that forms part of Mexico’s southern border with Guatemala, usually bustling cross-water commerce appeared to slow at this border town a day after just a half dozen marines showed up on the Mexican shore.

Tomas Leyva, a 65-year-old construction worker turned pastor from El Salvador, was preparing to board a raft back to Guatemala.

Saying he fled his home under threat from a gang, he planned to return later to Mexico vis the border bridge and apply for asylum at an official immigration control station .

“Now the situation is more serious, more strict, because the soldiers who were there yesterday weren’t there before,” Leyva said.

“What they’re doing is having an effect because they’re detaining a lot of people, but it’s not going to stop. There (in El Salvador) they say better killed by the gringos than by the gangsters.”

Wilmer Guerra, 28, was returning to Guatemala with his 4-year-old son, saying they had been stopped at a checkpoint in Tijuana on Mexico’s northern border with the U.S.

Before, people said that “with children we’d be able to pass easily, (but) things got hot in the past week,” Guerra said. He said he would try again when the situation calmed down.

Mexico’s government on Monday also highlighted the weekend “rescue” of nearly 800 migrants packed into semi-trailers, calling the operation a message that authorities are getting serious about combatting human smuggling.

Foreign Affairs Secretary Marcelo Ebrard said more than 150 of the 785 migrants found inside the double trailers of four semis Saturday in the Gulf coast state of Veracruz were children.

“We can’t allow human trafficking,” Ebrard said, contending that for many years it was tolerated by Mexican officials. “We might be experiencing one of the greatest human trafficking (situations) in the world.”

His comments came as Mexico continued to roll out the deployment on the southern border of members of the new National Guard militarized police force.

Until Monday, Mexican officials had spoken of a deployment of 6,000 to the southern border, but deputy foreign affairs secretary Maximiliano Reyes said during a news conference in Tapachula that some of those would go to the northern border and about 2,400 would be deployed to southeast Mexico.

Of those, 426 arrived in Tapachula Saturday, he said.

The National Guard will work with immigration agents to disrupt migrant smugglers and protect migrants. Reyes declined to provide additional details of the deployment so as to not alert smugglers. /gsg