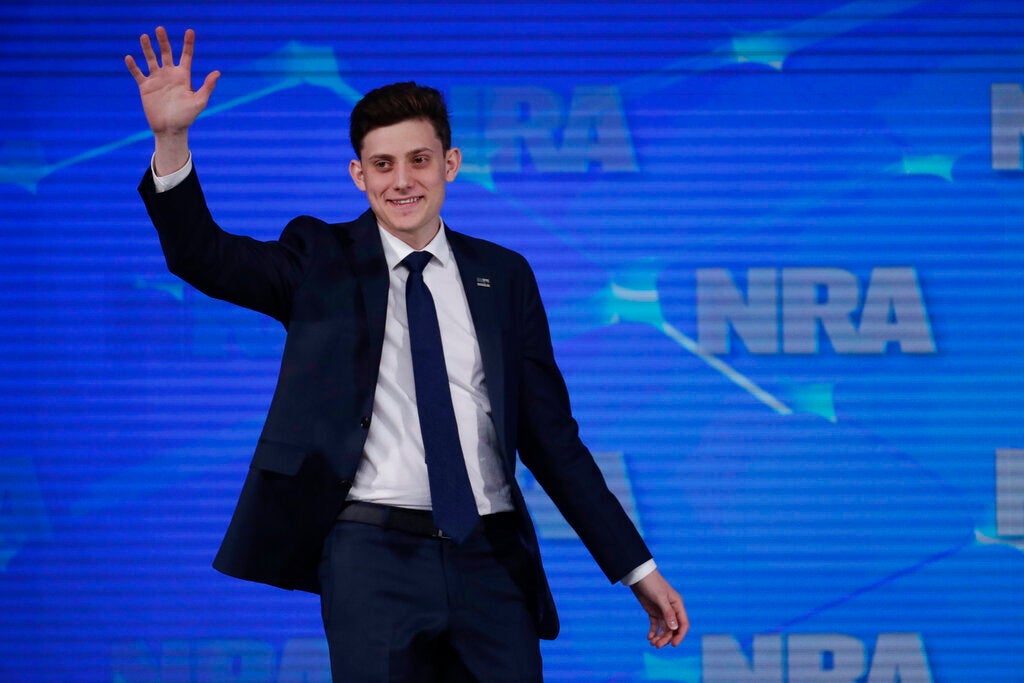 In this April 26, 2019 file photo, Kyle Kashuv, a survivor of the Marjory Stoneman Douglas High School shooting in Parkland, Florida, speaks at the National Rifle Association Institute for Legislative Action Leadership Forum in Indianapolis. On Monday, June 17, 2019, Kashuv said that Harvard University revoked his acceptance over racist comments he made online and in text messages about two years ago. (AP)

BOSTON  — A survivor of the Parkland school shooting announced Monday that Harvard University withdrew his admission over racist comments he made in a shared Google Doc and text messages nearly two years ago.

In a series of posts on Twitter, Kyle Kashuv shared several letters he received from the Ivy League school first notifying him that his admission offer was being reconsidered in light of the comments and, later, that it was being revoked.

The decision stems from comments that have surfaced online recently and that Kashuv says were shared among friends when he was 16, months before the February 2018 shooting at Marjory Stoneman Douglas High School in Parkland.

Screenshots that have circulated on social media appear to show Kashuv using racial slurs on Google Docs, an online word processor, and in text messages. The comments include anti-Semitic barbs and repeated use of a slur referring to black people.

Kashuv, now 18, has apologized for the comments and said he didn’t remember them until they spread online. In a May 22 statement on Twitter, as the comments began to spread, he said they were made by a “petty, flippant kid” and not the person he has become. He later said he made poor choices but bears no real racial hatred.

“We were 16-year-olds making idiotic comments, using callous and inflammatory language in an effort to be as extreme and shocking as possible,” he wrote in his May 22 apology. “I’m embarrassed by it.”

Two days later, Kashuv received a letter from Harvard demanding an explanation for the comments, noting that the school reserves the right to withdraw offers of admission for behavior that calls into question an applicant’s “honesty, maturity or moral character.”

Kashuv told Harvard that he “unequivocally” apologizes and that the remarks don’t represent the person he is today. “I take responsibility for the idiotic and hurtful things I wrote two years ago,” he wrote in a letter. “I made absolutely no excuse for those comments.”

In a June 3 response, Harvard’s admissions dean thanked Kashuv for his candor but said the school’s admissions committee, which makes the final call on applications, had voted to withdraw his offer.

“The committee takes seriously the qualities of maturity and moral character,” William Fitzsimmons wrote in a letter that Kashuv shared online Monday. “We are sorry about the circumstances that have led us to withdraw your admission, and we wish you success in your future academic endeavors and beyond.”

Harvard spokeswoman Rachael Dane declined to comment on the decision, saying the university does not publicly discuss individual admission cases.

Only rarely do colleges withdraw acceptance offers, but it occasionally happens. Harvard sparked debate in 2017 when it pulled offers from 10 incoming freshmen after they reportedly made racist and sexually offensive comments on Facebook.

Some experts said the 2017 case raised questions about freedom of speech, while others said colleges are right to have a zero-tolerance policy when it comes to racism and hate.

While some Parkland survivors have gone on to become prominent advocates of gun control, Kashuv has championed gun rights and the Second Amendment as he pushes for other school safety measures.

Kashuv said he had been planning to take a year off before starting at Harvard, so he could continue his work promoting school safety. Now he’s “exploring all options,” he said, but has missed the deadline for many colleges and already turned down other offers.

Kashuv’s posts on Monday drew mixed reactions on social media, with some saying he deserved to be forgiven and others saying Harvard made the right decision.