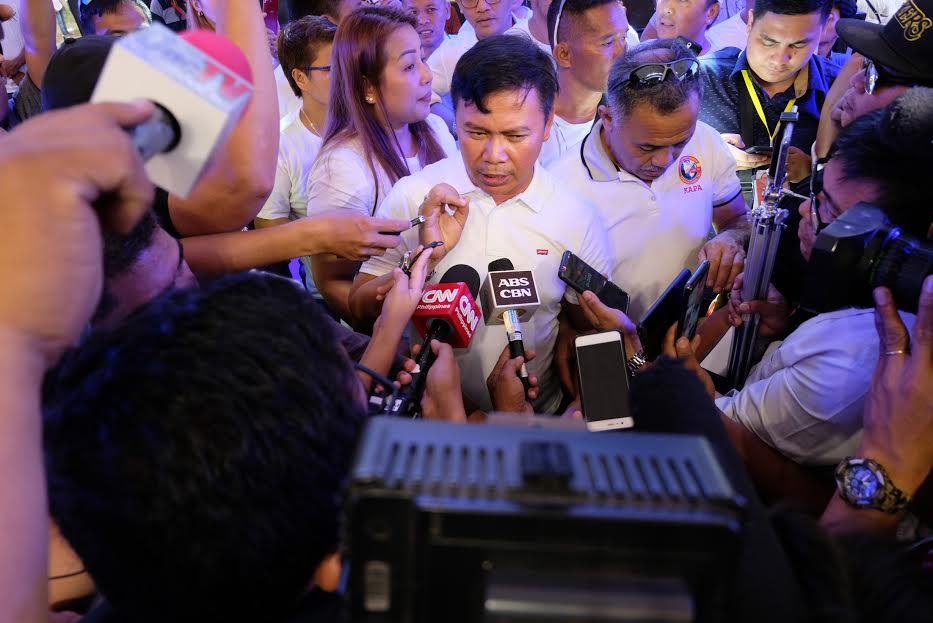 Kapa founder Joel Apolinario, with his wife Reyna behind, speaks to the media during the rally Thursday, June 13, 2019, in General Santos City. (Bong S. Sarmiento)

GENERAL SANTOS CITY, South Cotabato, Philippines — Amid the series of raids conducted against groups in Mindanao offering high-yield investments, not one person behind what government regulators had described as illegal operations had been arrested.

But the National Bureau of Investigation has vowed to pursue Joel Apolinario, the controversial founder of Kapa Community Ministry International Inc., and arrest him “even without an arrest warrant,” said lawyer Regner Peneza, NBI Sarangani district office chief.

Peneza said NBI agents were trying to locate Apolinario, who along with wife Reyna, showed up at a rally staged by his supporters here on Thursday afternoon. “The President had laid down the predicate—(that Apolinario) was committing a continuing offense and under that concept, a warrantless arrest could be effected,” he told the Inquirer.

Peneza said the NBI was also studying the possibility of arresting Apolinario under martial law powers should he be located in Mindanao.

The entire island of Mindanao has been under martial law since May 2017, after Islamic State-linked armed groups laid siege to Marawi City.

The siege ended five months later, in October 2017, but Congress, upon President Duterte’s request, had extended the effectivity of martial rule over the island until Dec. 31 this year.

Aside from Kapa, the police Criminal Investigation and Detection Group also raided last week the offices of Rigen Marketing and other groups offering investment schemes in Tagum City without the required permit from the Securities and Exchange Commission.

The government team seized printers and computers,  but other important items, like the computers’ central processing units in Rigen’s branch on Mankilam Street in Tagum, had been taken by the office’s occupants before the June 11 raid.

Authorities also raided the offices of Ever Arm Any Marketing in Tagum and Organico Agribusiness Ventures in Davao City.

On June 10, NBI agents raided the house of Apolinario in this city but failed to arrest him.  Simultaneous raids were conducted on the offices of Kapa and other organizations offering similar high-yield investments in different areas in Mindanao.

No one, however, arrested Apolinario during the June 13 prayer rally in General Santos City, where he arrived on a helicopter and left less than 30 minutes after addressing the crowd.

While President Rodrigo Duterte, in a separate venue that day, had warned the public against Kapa, Apolinario had told his supporters that their group’s operation was “already okay with the President.”

The President called Apolinario a “con artist” and reiterated his order to government agencies to go after the Kapa leader and his religious ministry.