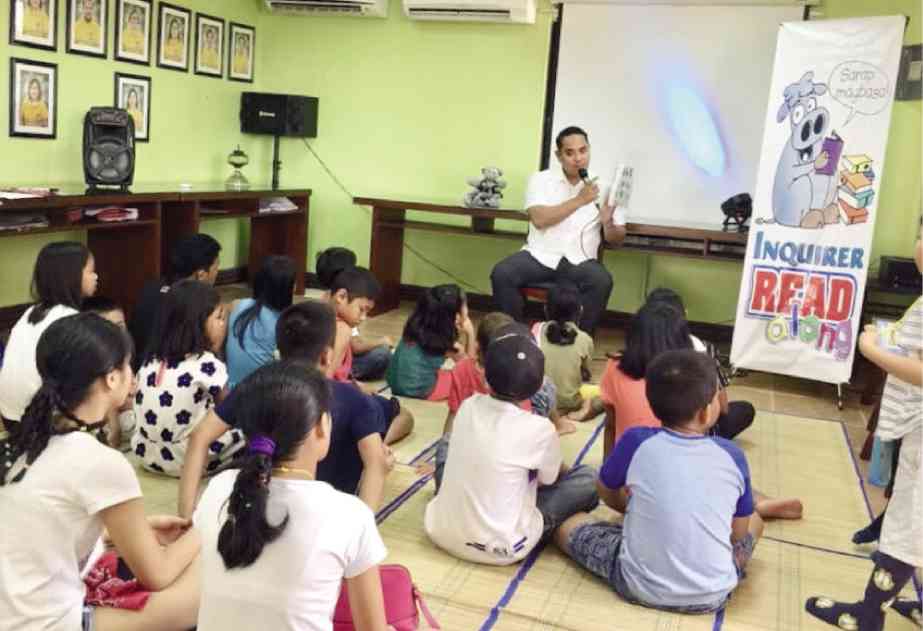 FATHER’S TALE Minglanilla Councilor Rajiv Enad says a father must be a role model to his children. Enad, who has three children, reads Maria Cecilia Sevilla’s “My Father, the Shape Shifter” to a group of Cebu children on Father’s Day. —PHOTOS BY GRACE OBERES

MINGLANILLA, Cebu, Philippines — Ten-year-old Chad Ubas made a Father’s Day card for his father, whom he had not seen for four years after his parents separated.

But he hoped his card would make his father happy, especially after his mother told him that he was suffering from stage 4 lung cancer.

But Ubas had no plans of giving the card, made from blue paper and with a big heart on the cover, personally to his father. “I’m not yet ready to see my father. I pity him. I’ll let my mother give this card to him,” he said in Cebuano.

He made the card during the Inquirer’s Father’s Day Read-Along session at Barangay Ward 3 in this town in southern Cebu on Sunday.

At least 30 children, age 5 to 10, listened to the story read by Minglanilla Councilor Rajiv Enad.

The book, “My Father, the Shape Shifter” by Maria Cecilia Sevilla, tells a story of how a boy used his imagination to remind him of his father, who is working abroad as a seaman. 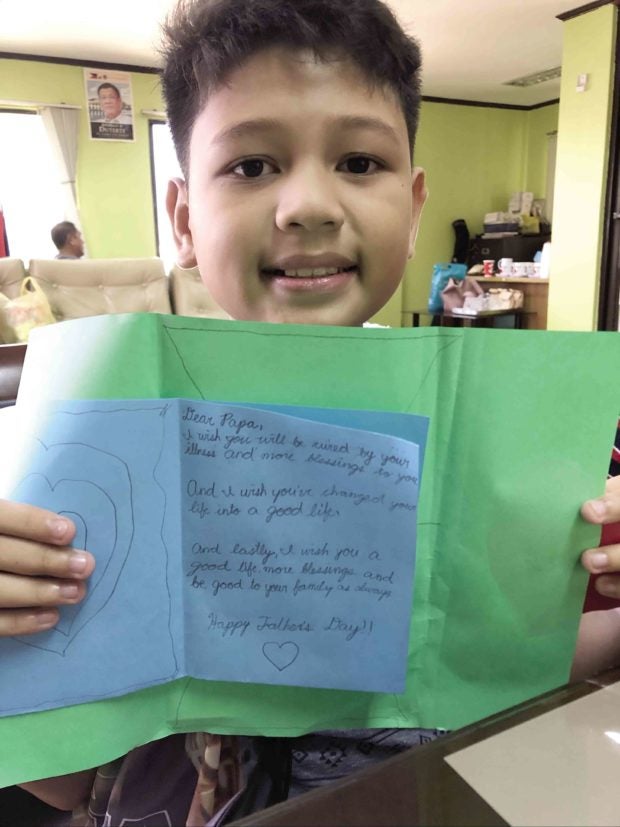 SON’S LOVE Chad Ubas, 10, conveys his love for his father through a card.

“For those whose fathers you see every day, hug and talk to them. Appreciate what they do. You’re blessed to get to see your fathers every day,” Enad told the children.

“On the other hand, if your father is away, then, like [the boy in] the story, make do with your imagination to remind you about your father who provides for your needs, like education and food,” he added.

Enad, a father of three children, said it was ultimately a gift to be a father.

Enad encouraged fathers to be role models to their children.

“The essence of being a father is you know you have a responsibility [in shaping] your children’s lives … Ultimately you have to be a better version of you,” he said.

After the sessions, the children made colorful cards and dedicated these to their fathers.

Ubas said he longed to reestablish connection with his father, whom he last saw when he was 4.

But with his father gravely ill, the boy felt that the clock was ticking.

“I wish my father will survive (cancer) so we can be together again,” he said.