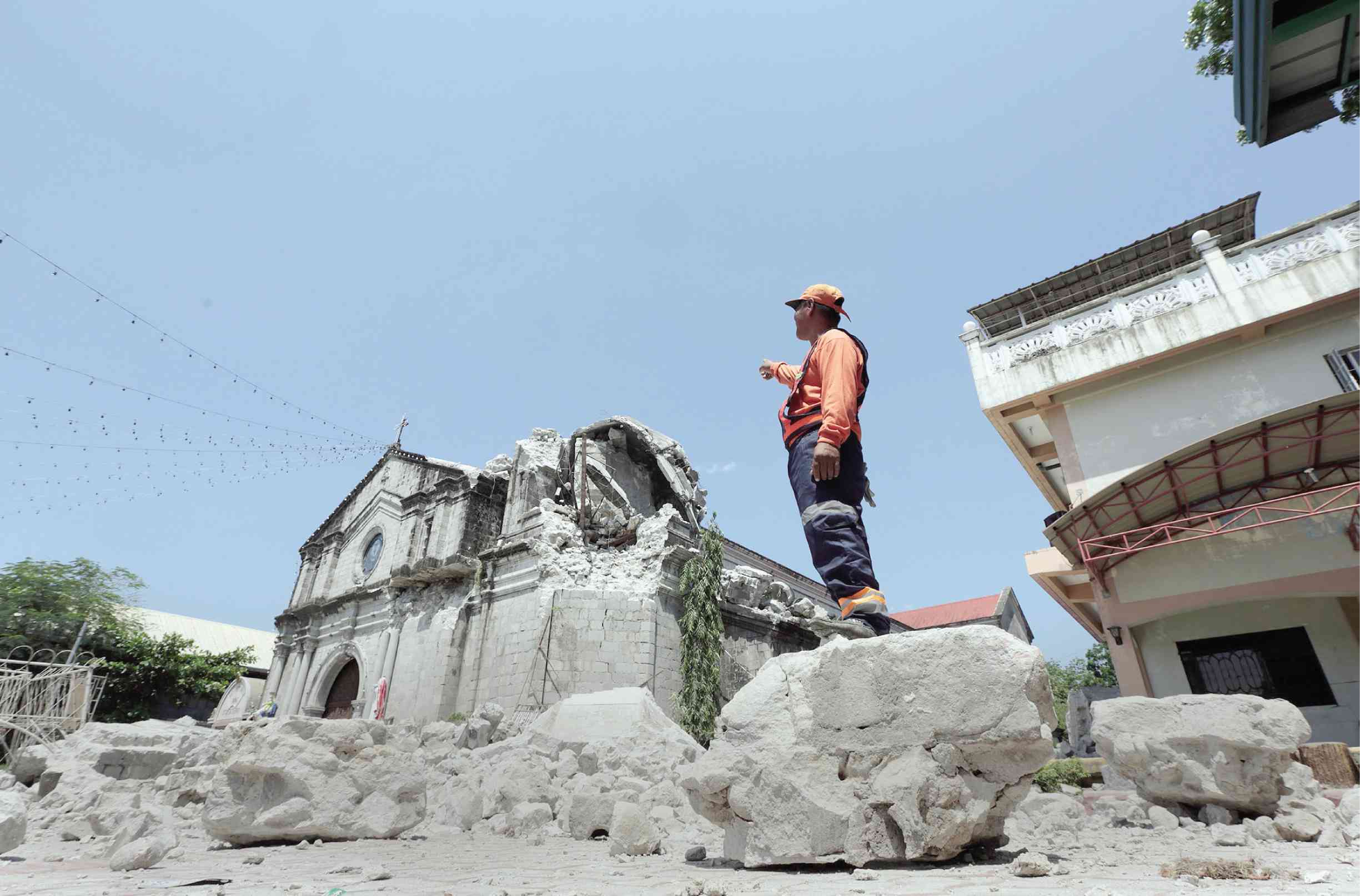 BELFRY GONE The bell tower of Santa Catalina de Alejandria Parish Church in Porac, Pampanga, is among the structures that collapsed when a 6.1-magnitude earthquake hit the province on April 22. —GRIG C. MONTEGRANDE

It also urged Catholics to keep the faith: “Nothing can overcome the courage and faith of the Kapampangan.”

During Mass, prayers are said for the faithful to be unwavering in their beliefs while churches are still closed for restoration.

“The quake is only an unwanted interruption.” said Fr. Emil Guiao, director of the ASF’s Archdiocesan Committee on Cultural Heritage (ACCH).

The Santo Rosario parish was the first to buckle down to work by presenting the extent of the damage and consulting with the laity on a restoration plan. “We hope to become the template for other parishes,” said Floyd Dizon, 33, an architect who has volunteered to help.

In Porac town, the parish pastoral council of Barangay Hacienda Dolores has been selling raffle tickets and soliciting construction supplies to rebuild its old chapel.

Writer-researcher Nina Tomen is confident that Catholics in Pampanga can restore their churches because “they have shown themselves to be generous.”

After the earthquake that destroyed churches in Bohol in 2013, Pampanga was among the provinces that came to the aid of the Diocese of Tagbilaran through a concert of the Loboc Children’s Choir that raised P2.6 million, Tomen noted.

She said the Pampanga faithful also raised P8 million for distressed parishes in the wake of Supertyphoon “Yolanda” (international name: Haiyan) in the Visayas in the same year.

The cost of restoring damaged heritage churches has yet to be determined, according to Guiao.

Restoration cannot be done anymore through the colonial-era “tributos” (taxes imposed by the Spanish king on the natives) or free labor by those unable to pay taxes, noted historian Francis Musni.

But Pampanga has many talents and artisans.

“It’s the living Church coming to the rescue of church structures because it sees these as sanctuaries and symbols of hope,” Tomen said.

The past tells how churches in Pampanga were built and rebuilt, said Msgr. Eugene Reyes, former ACCH director.

In Apalit, Augustinian friar Antonio Redondo built the Saints Peter and Paul Church from 1876 to 1883, spending only the equivalent of P30,000 through “good fiscal management.” He raised money and supplies by making the sacristan go around ringing a bell and accompanied by a brass band. Townsfolk followed him with their donations of sand and other materials.

The people of Apalit have been using donations to fund the five-year restoration of their church since 2017.

In olden times in Betis, construction and repairs were often initiated by the priest and carried out with the residents’ help, Tomen said.

Back then, it was the priests who supervised things for the Spanish king, Guiao said. Sometimes the “principales” (the upper class) initiated repairs and maintenance.

The Santiago Apostol Church in Betis was repaired in 1788 after the principales requested “polistas” (requisitioned laborers) from the government.

In all construction activities, the preparation of a bill of materials was a requirement. It included labor costs and the name of the person commissioned to oversee the work.

Apparently, there was transparency, as seen in the “cargo y data” (books of accounts) that listed expenditures as well as names of people and their contributions, from “hierro” (steel roof) and “pesus” (one peso) to “calaru” (duck egg whites used as binding material).

In those days, the faithful considered helping preserve and repair their churches an “indispensable duty of a Catholic,” Tomen said.

“The people donated their silver spoons and gold earrings or rings to make a bell. ‘Tutung ibat kareng tau’ (The materials truly came from the people),” Reyes said.

Archeologist Joel Mallari said the adobe used for Pampanga churches was volcanic tuff blocks quarried from the hills in Gubat and Telatundin Baka in Porac.

He said these were seen in the eroding walls of churches in the towns of Macabebe, Minalin, Candaba, Santa Ana and Mexico. The churches made purely from pumice were in Porac, Angeles, San Luis, Magalang, Santa Rita and, partly, Floridablanca.

“All the major rivers originating from the nearby eastern slopes of Zambales have abundant pumice stones,” Mallari said, adding that adobe was currently still being quarried in Valenzuela City. The church in Apalit has an adobe supplier.

The “palitada” (wall finishing)—also called the “skin of the church”—that held the adobe and bricks together was contributed by the people, Mallari said.

The materials used to make the “argamasa” (mortar) were powdered lime and water, egg whites, and crushed shards of earthenware and porcelain. The mortar also protected masonry walls from erosion and moisture.

Bamboo would be a welcome donation should builders decide to make “tabique pampango” for walls, Mallari said. In this technique, the mortar is applied on a screen of interwoven bamboo slats.

Tomen cited a wealth of technological advances to make restoration work easier, such as digital documentation for preparing the conservation management plan.

Guiao said that aside from volunteering technical expertise, Catholics in Pampanga could field labor to be trained by Escuela Taller, provide materials and pray for more help.

“This is going to be no construction spree,” he said. “We are going to do this right, step by step, following a process.”

Read Next
Group fights malnutrition one ‘mingo’ meal at a time
EDITORS' PICK
Diokno to Duterte: OK to make fun of buck tooth, but focus on people’s needs first
10 Filipinos positive for COVID-19 in UK, 7 in Ireland — envoy
IATF to LGUs: Issue ordinances vs attacks on frontliners, COVID-19 patients
Nograles: Cabinet members to donate 75% of monthly salary to aid COVID-19 fight
Quick chat with Nicole Andersson: ‘You really don’t need much to be happy’
Robredo spox thanks Duterte for defending VP’s efforts vs COVID-19
MOST READ
Coronavirus hotbed Rizal to shut borders on April 6
Sotto on Isko Moreno’s call: We do our job without the media following our every move
‘Money Heist,’ ‘Tales from the Loop,’ ‘Killing Eve,’ ‘Never Have I Ever,’ ‘After Life’: Five not-to-be missed series this April
ADB warns PH against prolonged lockdown
Don't miss out on the latest news and information.