CHARLESTON, S.C.  — Four Democrats vying for their party’s presidential nomination honed in on the economic concerns of the black community during a forum Saturday in South Carolina, a state where nonwhite voters will play a major role in next year’s primary election.

Appearing on stage one at a time, Sens. Cory Booker of New Jersey and Elizabeth Warren of Massachusetts, Mayor Pete Buttigieg of South Bend, Indiana, and former Texas Rep. Beto O’Rourke all stressed the need to increase access to capital for black business owners as part of a broader effort to address wealth inequality. 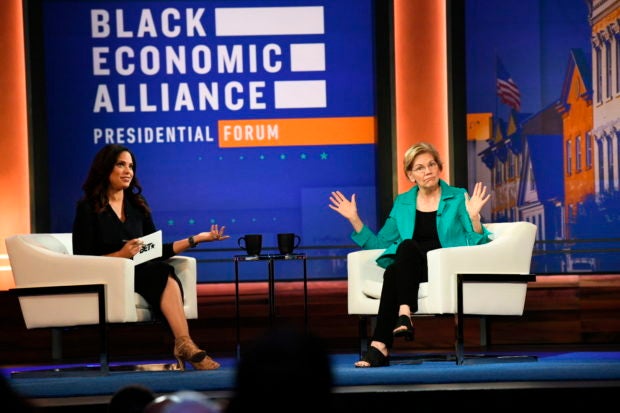 Warren expounded on what she’s called her tax on “ultra-millionaires,” which she says would fund her education proposals, including student debt cancellation for many and additional funding for historically black colleges and universities.

“It’s about building opportunity,” Warren said at the forum sponsored by the Black Economic Alliance, noting that she feels her plan would be met with support even from some Republicans. “They understand that this economy is badly broken.”

Warren opened her remarks in Charleston with a moment of remembrance for the Emanuel African Methodist Episcopal Church shooting, four years ago this weekend, in which nine black churchgoers were killed during Bible study.

Buttigieg focused on increasing the number of federal government contracts awarded to black-owned businesses, saying this would provide a major boost.

Asked what he would do to increase his outreach to black voters — an area where Buttigieg has acknowledged he has work to do — he said he’s making an effort to get to know them.

“We have to have an authentic encounter with people,” Buttigieg said, noting that events like the forum were a piece of that agenda.

O’Rourke said he would push for more affordable housing options, giving a nod to Columbia Mayor Steve Benjamin’s efforts in the state capital.

The last to address the group and the only black candidate at the forum, Booker said he wants as president to address inequalities in all sectors of America, although “poverty is disproportionately impacting communities of color.”

Noting, as he often does, that he lives in a low-income community himself, Booker said he’s more in tune with people struggling with issues like skyrocketing rents.

Former Vice President Joe Biden and Sens. Kamala Harris of California and Bernie Sanders of Vermont sent videos outlining some of their plans for addressing economic issues pertinent to the black community.

Before the forum, O’Rourke, Booker and Buttigieg spent time with striking McDonald’s workers in the Charleston area who want the company to allow its employees to organize. A $15 national minimum wage has become a popular Democratic campaign promise, but the party itself is split over putting it in place.

Ahead of the candidates’ appearances, Tony Coles, co-chairman of the Black Economic Alliance, said the group chose South Carolina because of its prominent position on the presidential primary calendar. The state, where the majority of Democratic primary voters are non-white, holds the first balloting with a largely black electorate.

In the 2018 midterms, Coles said, the alliance spent $3.8 million on efforts to increase black voter registration and turnout. /gsg