HAGATNA, Guam — A Catholic group has protested the governor of Guam’s plan to recruit abortion providers to the U.S. territory where no doctors are currently willing to terminate pregnancies. 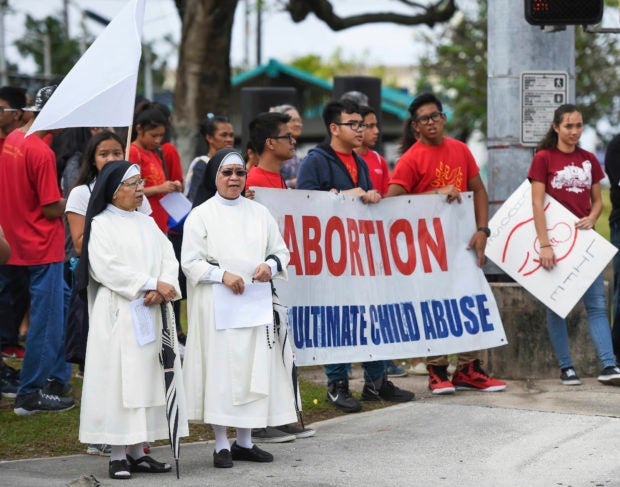 In this Jan. 22, 2017, photo, the Guam Catholic Pro-Life Committee holds its annual “Chain for Life” protest against abortion at the Guam International Trade Center intersection in Tamuning, Guam. The first female governor of Guam says she’s concerned that a lack of abortion access in the U.S. territory means women will be forced to seek illegal or dangerous alternatives. (Frank San Nicolas/The Pacific Daily via AP)

The Democratic governor told The Associated Press she is concerned women could be forced to seek unsafe and illegal procedures after the last abortion provider retired last year.

One resident told the Pacific Daily News that recruiting an abortion doctor will make Guam a better place.

“If the governor makes it happen, it’ll truly show that she meant it when she said she’ll make Guam a better place,” said 20-year-old Kimmi Yee, who was born and raised on Guam.

“I’d be glad to know that women have the ability to choose and will be able to do it safely.”

A Catholic anti-abortion group protested the recruitment idea at the governor’s office on Friday.

“If the governor is not convinced, we’ll do other measures to further our cause,” Perry said. “We will not stop until all abortion is outlawed and all anti-life laws will be abolished.”

Jayne Flores, the director of the Bureau of Women’s Affairs, said she is meeting with Public Health officials to talk about a plan to recruit a doctor to provide abortion services. The administration is also working to provide greater access to birth control to reduce unwanted pregnancies.

The archdiocese on the heavily Catholic island said in a statement it was appealing to the governor to change her position.

“The fact is that human life begins at conception and the Roman Catholic Church affirms and promotes this truth. There is no other moral or logical place to draw the line,” the Archdiocese of Agana said.

Arsha Abellera, who has lived on Guam for the past decade, said the administration’s plan to recruit a doctor to provide abortion is long overdue.

“It is the government’s job to protect women and their right to choose,” she said. “A woman’s body is her house and whatever she does with it shouldn’t be anyone’s business.”

Government records show about 250 abortions a year were performed on Guam from 2007 to 2017, the Pacific Daily News said. No abortions have been reported in the past 12 months. /gsg