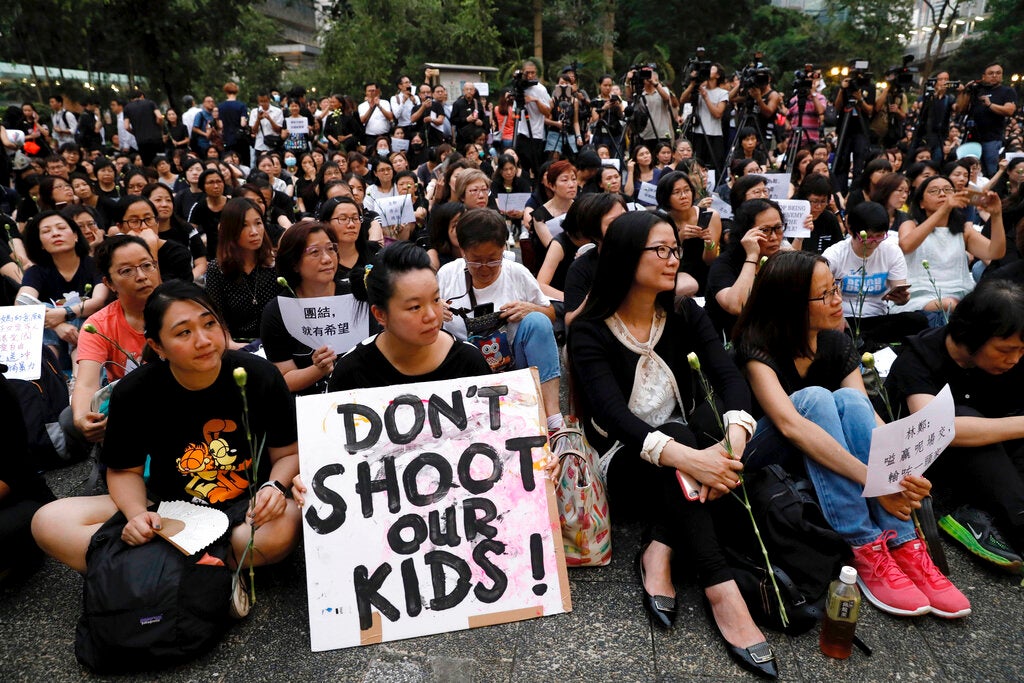 Hundreds of mothers protest against the amendments to the extradition law after Wednesday’s violent protest in Hong Kong on Friday, June 14, 2019. Calm appeared to have returned to Hong Kong after days of protests by students and human rights activists opposed to a bill that would allow suspects to be tried in mainland Chinese courts. (AP Photo/Vincent Yu)

The city’s pro-Beijing leader Carrie Lam has faced mounting calls to abandon the controversial legislation, including from her own political allies and advisers.

The international finance hub was rocked by the worst political violence since its 1997 handover to China on Wednesday as tens of thousands of protesters were dispersed by riot police firing tear gas and rubber bullets.

As criticism mounted — and signs emerged of a growing discomfort among party leaders in Beijing — local media in Hong Kong reported that Lam’s administration was planning to announce some sort of climbdown as it tries to find its way out of the political crisis.

Her office said that she would hold a press conference at 3 p.m. at the same government complex that was besieged by protesters earlier in the week.

The South China Morning Post, Now TV, TVB and RTHK all cited government sources as saying the plan was to postpone bringing the divisive bill back to the city’s parliament for debate — the trigger for Wednesday’s clashes.

The SCMP said Lam held an emergency meeting on Friday night with her advisers while Chinese officials were also meeting in the nearby city of Shenzhen to map a way out of the impasse.

Tensions are running high with protest organizers planning another mass rally on Sunday.

Lam, who is appointed by a committee stacked with Beijing loyalists, has so far refused to abandon the bill despite months of criticism from business and legal bodies — and a record breaking rally on Sunday where organizers said more than one million protesters hit the streets.

But on Friday she found herself facing growing calls from within her own political camp to reverse course and tamp down spiraling public anger — including from hardline pro-Beijing lawmakers.

“Shouldn’t (we) cool the citizens down? I think to postpone it for a little bit is not a bad thing. At this moment, the government should self-examine,” Ann Chiang, a hardcore pro-Beijing lawmaker, told i-Cable News.

But others have warned against Lam bending to the protesters.

“If the government caves in to violence and external influences, in the long run that would also make Hong Kong ungovernable,” pro-Beijing lawmaker Regina Ip told reporters.

Opposition to the extradition bill has united an unusually wide cross section of Hong Kong.

Protest organizers have said they will only accept a full withdrawal of the bill, not a postponement.

James To, a lawmaker from the city’s pan-democrat camp, called on Lam to step down

“The credibility of our chief executive has already been written off, it’s a kind of government that cannot have any credibility to rule anymore,” he told reporters.

Beijing has vocally supported the bill and earlier this week threw its full support behind the Lam administration, calling protesters “rioters.”

But it has since sought to distance itself as public anger spiraled.

“The central government gave no instruction, no order about the… amendment,” Lu Xiaoming, the Chinese ambassador to Britain, told the BBC.

“This amendment was initiated by the Hong Kong government.”

On Friday night, thousands of parents gathered in a park in the heart of the city’s commercial district to condemn the use of rubber bullets and tear gas against predominantly young protesters on Wednesday.

Y. Chan, a 50-year-old mother of two, said she was outraged watching the scenes unfold.

“It’s calling for all mothers who had enough already of what happened the other day,” she told AFP. “My kids were out there also that day. And although I want them to be safe, want them to be at home, but this is their home. They are defending it.”  /muf