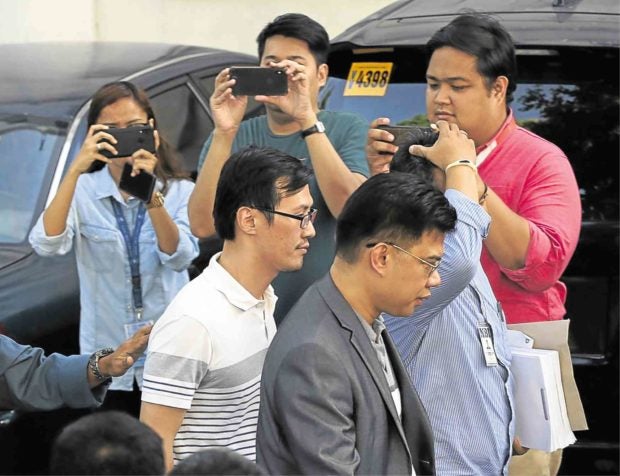 The Department of Justice (DOJ) said on Friday it would file charges of estafa against the owner and two former employees of WellMed Dialysis and Wellness Center Corp. in connection with a scam to collect Philippine Health Insurance Corp. (PhilHealth) benefits for dead patients.

As of late Friday afternoon, however, Perete said they were “still verifying” whether the charges had been filed in court.

Devanadera ruled that WellMed officers “conspired in using falsified documents to collect payments from PhilHealth for alleged medical services to patients who were already dead.”

Sy has been detained at the National Bureau of Investigation since his arrest on Monday. Roberto and De Leon are also being held by the NBI.

The same case filed by the NBI against seven other WellMed officers, who are not in custody, will undergo preliminary investigation, Devanadera said.

Roberto and De Leon blew the whistle on the “ghost” dialysis and other alleged WellMed rackets, which were first reported by the Inquirer.

Earlier on Friday, Sy’s lawyers demanded the release of their client, saying no charges had been filed in court more than 36 hours after his arrest, as required by law.

“Up to this date (June 14), despite the lapse of the 36-hour period provided under Article 125 of the Revised Penal Code, no information nor complaint has been filed with the proper judicial authorities against Mr. Sy,” lawyers Kristjan Gargantiel and Marcelino Atanante IV said in a letter to Justice Secretary Menardo Guevarra.

“We respectfully demand  the immediate release of Mr. Sy for there is no ground, under any laws, rules or regulations, for his continued detention,” they said.

NBI deputy director and spokesperson Ferdinand Lavin said Sy, Roberto and De Leon would remain under their custody until ordered released by the DOJ.

Former presidential spokesperson Harry Roque, who represents the whistleblowers, said Sy had waived his right to be charged within 36 hours when he submitted his case for resolution during his inquest.

“Cause of action for failure to charge within 36 hours was expressly waived by him,” he told the Inquirer in a text message.

Sy was placed under arrest around 4 p.m. on Monday and brought to the DOJ in the afternoon of the following day for inquest.

During the inquest, Devanadera denied Sy’s petition to be released and upheld his warrantless arrest, citing the decision a few hours earlier by the Manila Regional Trial Court Branch 20 to deny his habeas corpus petition.

On Thursday, Guevarra said they would still be investigated for possible criminal offenses related to any “ghost” claims paid by the state insurance company to hospitals or medical clinics.

“The NBI is looking into the possibility that certain PhilHealth officials may be charged for violation of the antigraft law if they knowingly participated in this allegedly fraudulent schemes and benefited from it,” Guevarra told reporters.

Lavin said the NBI probers were investigating how widespread the alleged scam was and who else were involved.

“They have only discovered a few of what seemed to be a voluminous amount of false claims, and that was only for dialysis treatments,” he said

“Some government officials insinuated that there might still be several false claims for other treatments, like kidney transplants, cataract treatments, so we would go on with that as requested by PhilHealth,” Lavin said.

Senate blue ribbon committee chair Richard Gordon on Friday said he would not immediately jump into an investigation of the alleged scam.

“I’m still waiting where the President’s actions, which have been good so far, will go,” he said in a statement.

Gordon also said he would “religiously look at what’s going on” and may file a bill in the next Congress to amend existing laws to prevent a repeat of such scams.

He also expressed apprehension that the scam might complicate the implementation of the universal health care program.

“I’m completely devastated by this. The Congress of the Republic of the Philippines recently passed the sin tax bill, which will fund the universal health care. Now we’re seeing our own people are cheating. To me that is very serious,” Gordon said.

“There’s something wrong there. Have we lost our moral compass?” he lamented. —WITH REPORTS FROM DJ YAP, KRIXIA SUBINGSUBING, CHRISTINE O. AVENDAÑO AND TETCH TORRES-TUPAS