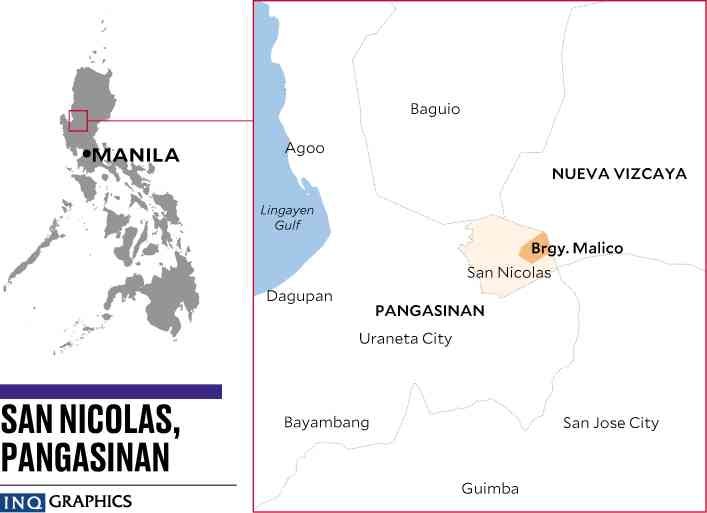 SAN NICOLAS, PANGASINAN — Malico, a mountain village in this eastern Pangasinan town, can be one of the country’s new summer destinations with the completion this year of the Pangasinan-Nueva Vizcaya Road.

Nestled on the top of the Caraballo mountains, Malico can now be reached by land travel in 1.5 hours from this town.

The rehabilitation of the 22.3-kilometer Pangasinan segment of the Pangasinan-Nueva Ecija Road, also known as the Villa Verde trail, began in 2015.

About 14 km had been cemented, according to a project brief of the Ilocos regional office of the Department of Public Works and Highways (DPWH).

In the 1980s, the difficulty of maintaining the trail, compounded by a very low daily traffic average, prompted the DPWH to close it to motorists.

Its condition worsened after the 1990 earthquake because of massive road slips and landslides that left most parts of the trail impassable.

Once work is completed, the Pangasinan-Nueva Vizcaya Road will be the second road linking the Ilocos region and Cagayan Valley, next to Maharlika Highway, which connects Pagudpud town, Ilocos Norte province and Sta. Praxedes town, Cagayan province.

“We plan to highlight tourism in Malico. [With its cold weather] it can easily become one of the summer destinations,” said Mayor-elect Alice Primicias-Enriquez.

“Definitely, it’s a destination. That place also has temperate crops, like strawberries and upland vegetables,” said Martin Valera, Ilocos regional director of the Department of Tourism.

Aside from the weather, Valera said tourists would enjoy Malico’s pine forests and the breathtaking view of the sunset and the Agno River.

“They can also visit the war monuments put up by the Japanese and American soldiers who fought there,” he said.

“The trail itself was named after a Spanish priest, Juan Villa Verde, who, along with Spanish missionaries, crossed the jungle in 1872 to bring Christianity to Cagayan Valley,” Valera said. —GABRIEL CARDINOZA