MEXICO CITY – A reporter was shot dead in the southern state of Tabasco, her newspaper said Wednesday, the latest in a string of journalist killings in one of the world’s most lethal countries for the profession.

Another reporter was kidnapped by a pair of armed men in the nearby state of Veracruz.

Norma Sarabia, who covered crime and police for Tabasco Hoy, was talking to a family member in front of her home in the municipality of Huimanguillo when a car pulled up with at least three masked assailants inside, the newspaper reported. 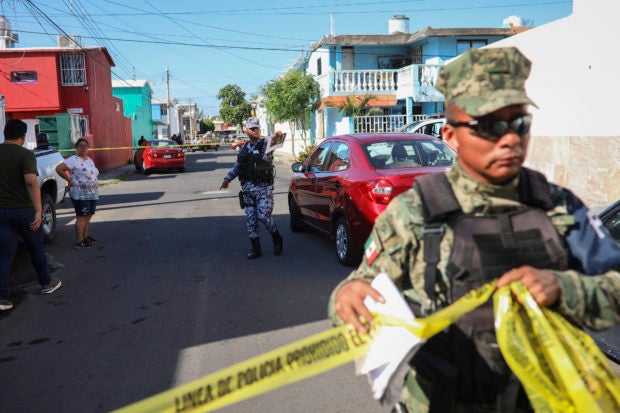 Authorities cordon off the area where journalist Marcos Miranda was kidnapped, in Boca del Rio, Veracruz state, Mexico, Wednesday, June 12, 2019. Miranda was abducted this morning from his home by armed men, according to the Network of Veracruz Journalists. (AP Photo/Felix Marquez)

One got out and opened fire at close range, striking her with at least four bullets.

Municipal police confirmed the killing but did not immediately provide further details. Tabasco state prosecutors said an investigation was underway.

There was no immediate word on whether the murder may have been linked to her work.

Local journalist Nacho Carvajal, who works with various national and international outlets, knew Sarabia for several years and even collaborated on projects with her.

He said Sarabia was “fearless” in how she had covered criminal organizations that rob gasoline tankers in Tabasco state. Sarabia was receiving threats for at least a year, Carvajal said.

“She was worried for her family,” he said.

But the problem has transcended administrations: Ten journalists were killed in Mexico in 2018, the deadliest year to date for the country.

Jan-Albert Hootsen, the Mexico representative for the CPJ, tweeted that since he joined the press freedom nonprofit in 2016, there have been 34 journalists murdered in Mexico with none of the cases officially solved.

The commission said 149 journalists have been killed in Mexico since 2000.

In the neighboring state of Veracruz, Marcos Miranda Cogco was abducted from his home by armed men in in the morning, according to the Network of Veracruz Journalists.

Miranda’s wife, María del Pilar Gasca, pleaded for his safe return: “Please bring my husband back to me,” she told reporters.

Del Pilar added that Miranda has received threats for years over his reporting critical of the local government.

Carvajal said he has known Miranda for 15 years and that his kidnapping is “strange” because he didn’t cover organized crime.

Authorities in Veracruz said they are looking into Miranda’s abduction. /gsg