WASHINGTON – Former White House communications director Hope Hicks has agreed to a closed-door interview with the House Judiciary Committee, the panel announced Wednesday, a breakthrough for Democrats who have been frustrated by President Donald Trump’s broad stonewalling of their investigations.

The Judiciary panel subpoenaed Hicks, a close and trusted Trump aide who worked for the presidential campaign and in the White House, last month as part of its investigation into special counsel Robert Mueller’s report and obstruction of justice. 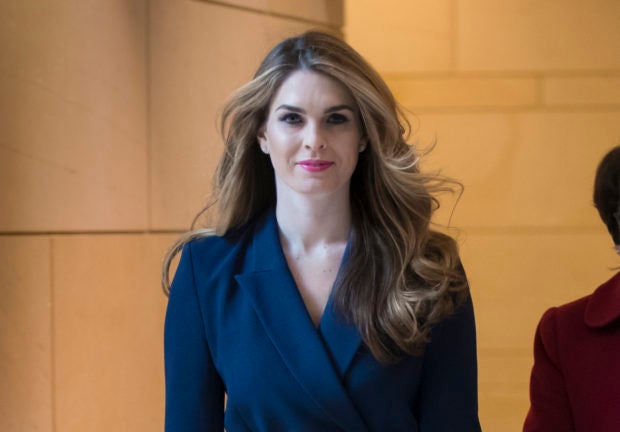 FILE – In this Feb. 27, 2018 photo, then-White House Communications Director Hope Hicks arrives to meet behind closed doors with the House Intelligence Committee, at the Capitol in Washington. Hicks has agreed to a closed-door interview with the House Judiciary Committee, according to two people familiar with the deal. (AP Photo/J. Scott Applewhite, File)

Her June 19 interview will mark the first time a former Trump aide has testified before the panel as part of its probe.

Hicks was a key witness for Mueller, delivering important information to the special counsel’s office about multiple episodes involving the president.

That includes the president’s role in the drafting of a misleading and incomplete statement about a 2016 Trump Tower meeting at which Donald Trump Jr. expected to receive dirt on Democrat Hillary Clinton.

Hicks and another former White House aide, Annie Donaldson, both defied subpoenas last week to provide documents to the committee after the White House directed them not to cooperate.

That came after former White House counsel Don McGahn also defied subpoenas for documents and testimony at the direction of the White House. McGahn was mentioned frequently in Mueller’s report, in addition to Donaldson, who was his aide.

It is unclear whether Hicks will decline to answer some questions related to her time in the White House.

She has so far declined to release any documents related to that period after the White House said she had no legal right to provide them.

But she has turned over documents related to her time on the Trump campaign.

While the interview will be behind closed doors, the committee chairman, Jerrold Nadler, said the interview transcript will be released to the public.

“It is important to hear from Ms. Hicks, who was a key witness for the special counsel,” Nadler said.

“Ms. Hicks understands that the committee will be free to pose questions as it sees fit.”

Democrats hope that Hicks’ interview will be the first of many related to Mueller’s report.

They are expected to go to court soon to enforce a subpoena against McGahn, and negotiations are ongoing for Mueller’s own testimony.

Mueller has made it clear that he doesn’t want to testify and will not go beyond the substance of the report in any questioning, but Democrats want to talk to him anyway. /gsg