Brian Jetter was on life support, a healthy 40-year-old suddenly battling pneumonia and sepsis, and a slew of tests had failed to find the cause.

Mystery illnesses like this kill thousands of people each year when germs can’t be identified fast enough to reveal the right treatment. 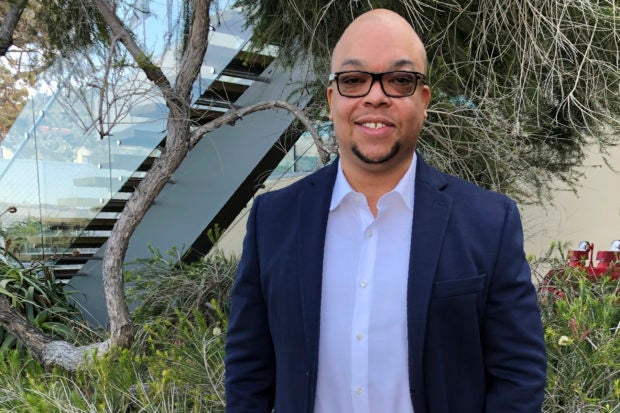 In this March 15, 2019 photo, Brian Jetter poses for a portrait in La Jolla, Calif. In 2018 at 40, he was suddenly battling pneumonia and sepsis, and a slew of tests had failed to find the cause. But a high-tech genetic test was used to search his blood for bits of non-human genetic material from viruses, fungi and the like. It detected unusual bacteria that probably got into the Connecticut man’s lungs when he choked and accidentally inhaled bits of a burger weeks earlier. (AP Photo/Marilynn Marchione)

Now genetic tests are helping to solve these cases.

One finally was used to search Jetter’s blood for bits of non-human genetic material from viruses, fungi and the like.

It detected unusual bacteria that probably got into the Connecticut man’s lungs when he choked and accidentally inhaled bits of a burger weeks earlier.

With the right medicine, he recovered and went home to his 5-year-old son.

“I realized how fragile life is,” Jetter said. “No matter how healthy you are, the smallest microbe can destroy you.”

But using them to detect infectious diseases is so new that few doctors and even fewer patients know they’re available.

A study of one test is published in Thursday’s New England Journal of Medicine.

They are modernizing a field long overdue for an overhaul.

To identify bacteria, labs still rely on century-old techniques from Louis Pasteur — putting a few drops of blood or other sample in a lab dish and waiting days or sometimes weeks to see what germs grow.

To test for a virus, a doctor usually has to guess what the patient is sick with.

Testing for a fungus or some other things can take a long time.

Once fragments of foreign DNA or other genetic material are found, their code is analyzed, or sequenced, to identify bacteria, viruses, fungi and parasites causing sepsis, meningitis, encephalitis and other deadly illnesses.

“The key advantage of sequencing is it can look for everything at once” rather than doing separate tests for each virus or other microbe that’s suspected, said Dr. Charles Chiu, a microbiologist at the University of California, San Francisco.

He led the New England Journal study that tried a spinal fluid test on 204 children and adults with meningitis or encephalitis, dangerous illnesses that aren’t always caused by an infection.

The gene test wasn’t perfect. It missed some cases, but also found others that standard tests missed.

In all, 58 infections were diagnosed. The gene test matched standard lab findings in 19 cases, it found 13 more that standard testing missed, and missed 26 that the standard tests eventually found.

Doctors say the gene-based tests could be a fast, non-invasive first step for serious or unusual cases.

“For infectious disease, you need to know the answer today,” because a patient’s risk of dying goes up the longer the cause isn’t found, said Dr. Asim Ahmed, medical director at Karius Inc.

The Redwood City, California, company sells a blood test developed by Stanford University scientists that searches for 1,200 bacteria, fungi, viruses and parasites at once and gives a result within two days.

The test showed high agreement with standard lab testing in a study in the journal Nature Microbiology.

“The biggest issue is the cost” — around $2,000 for the Karius test, said Ali Torkamani, a San Diego scientist who directs a genetics conference that featured these tests in March. More competition may lower the price and lead to wider use, he said.

Karius has its own lab for its test. Other companies offer software and tools that hospitals can use to develop their own gene-based tests.

One of them, Arc Bio, based in California and Massachusetts, offers virus testing from blood and gives an answer in less than two days.

IDbyDNA, based in San Francisco, uses a Utah lab that works with 3,000 U.S. hospitals. It gives an answer in about 48 hours once a sample arrives, said its chief medical officer, Dr. Robert Schlaberg, a University of Utah pathologist.

So far, hospitals are using these tests for the worst cases — long, unexplained illnesses or very vulnerable patients such as children and people with cancer or weak immune systems.

Dr. Asha Shah tried one for the first time last year, when Jetter was rapidly getting worse at Stamford Hospital in Connecticut.

“He had multiple blood tests, chest X-ray, CAT scan, you name it,” she said. “I thought, this doesn’t make sense, why aren’t we getting any answers?”

The Karius test revealed unusual oral bacteria in his lungs, suggesting he’d inhaled some while choking on the burger.

An even more unusual story emerged when Dr. Amir Khan, an infectious disease specialist at Carle Foundation Hospital in Urbana, Illinois, ordered a Karius test for 47-year-old Ryan Springer, who doctors first suspected of having cancer.

“Breathing made my lungs feel like they were on fire,” said Springer, a radio station program director in Champaign, Illinois.

He turned out to have tularemia, sometimes called “rabbit fever,” which can come from inhaling bacteria from infected rodents or running over their droppings with a lawn mower. With the right treatment, he recovered.

“This is the future of medicine,” Khan said. When patients are very sick, “every minute and hour counts.” /gg