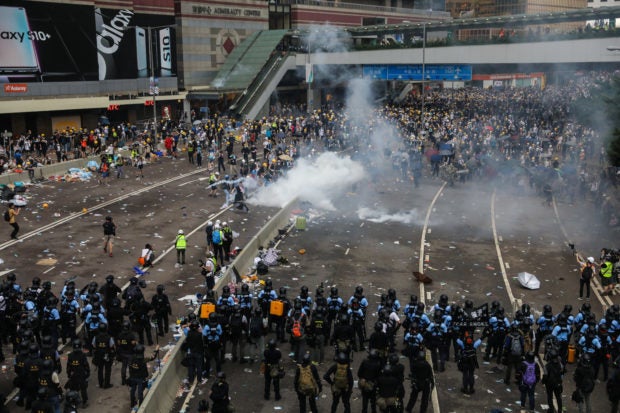 Protesters react after police fired tear gas during a rally against a controversial extradition law proposal outside the government headquarters in Hong Kong on June 12, 2019. – Violent clashes broke out in Hong Kong on June 12 as police tried to stop protesters storming the city’s parliament, while tens of thousands of people blocked key arteries in a show of strength against government plans to allow extraditions to China. (Photo by DALE DE LA REY / AFP)

HONG KONG — As Hong Kong is convulsed by fresh anti-government protests, many of those who have taken to the streets said they feel this is their last chance to protect the city’s freedoms after years of slow strangulation by Beijing.

Four years ago, huge pro-democracy “Umbrella Movement” protests brought parts of the city to a standstill for months, but that campaign eventually fizzled without the government making any major concessions.

The current protests are focused on a controversial proposal to introduce a law allowing extraditions to countries Hong Kong doesn’t already have a treaty with – including China.

Organizers said over a million people took to the streets on Sunday – police put the figure at a more modest 240,000 – but pro-Beijing Chief Executive Carrie Lam has rejected all calls to delay or withdraw the bill.

“We have been listening and listening very attentively,” she said after Sunday’s protests, but insisted her administration had already made substantial concessions.

While the extradition law may be the rallying point for protesters, many said dissatisfaction is more deeply rooted.

Here are some of those voices:

Kit Ho, 35, a finance worker, had tears streaming down her face as she described why she felt compelled to join the protests.

“The government wasn’t elected by the people and clearly they don’t pass laws based on the universal values shared by Hong Kongers and the international community.

“There hasn’t been any time for Hong Kong people to gasp for breath. We have worked so hard to build a civilised society.”

Jason Ng, a lawyer and activist who wrote a book about the Umbrella Movement said the backlash against the extradition law had been caused by “outrage and worry” growing for years.

“Since the Umbrella Movement in 2014, Beijing has accelerated its political agenda for Hong Kong and tightened its grip on civil society.

“It’s much more wary of dissent and less likely to give in to protests and other forms of popular demands, for fear that it might encourage and embolden civil society.

“The extradition bill controversy has backfired on Beijing by galvanising civil society once again, after years of apathy and protest fatigue in the aftermath of the Umbrella Movement.

“Beijing is obviously fed up with Hong Kong after the Umbrella Movement, that Hong Kongers have simply refused to learn to be grateful and obedient to the mother country.

“But we won’t accept defeat. The one million strong protest parade was a display of the power of the powerless.”

Tom Chan, 28, a finance worker, took the day off work and donned a black mask and dark glasses to join the protesters because he felt profoundly pessimistic about the city’s future.

“Of course I hope this can be resolved peacefully, without any clashes, but it depends on whether the government is willing to communicate with the people. If they continuously ignore the opinion of the whole society, then it could provoke resistance.

“I think this is even grimmer than the Umbrella Movement. The government is ignoring the will of the people even more after that occupation. I feel even more miserable now.” /kga