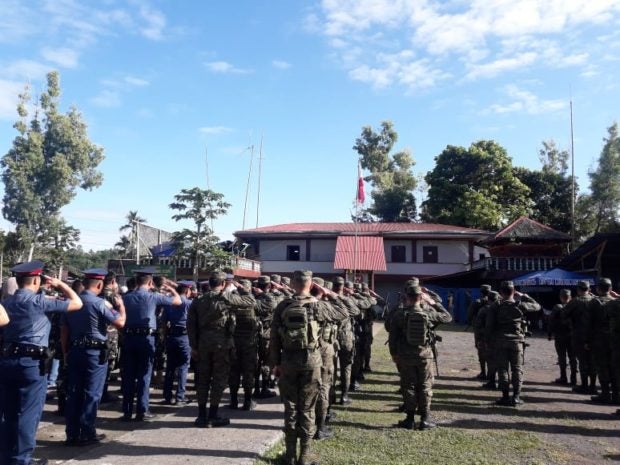 After four massive military operations against the Islamic State-inspired Dawlah Islamiya-Maute, the residents of Butig town joined the soldiers of Philippine Army’s 49th Infantry Battalion in a flag raising ceremony on Wednesday to commemorate the country’s 121st Independence Day.

Students who graduated from a Youth Leadership Seminar, members of the Philippine National Police, local government officials and employees and those from the local academe also participated in the flag raising rites.

It was the second Independence Day flag raising here since 2016, but this year’s ceremony is more significant according to Faisal Ronda, principal of Butig National High School. This is because the old municipal building where the Philippine flag was hoisted has been fixed.

In February 2016, the first military operation was conducted to rescue six sawmill workers abducted by the extremists completing their training in this town, which is considered as the birthplace of the Maute group.

Four of the six victims were freed but the other two were beheaded. Military troops retrieved their headless bodies during the operation while their heads were recovered at the Maute’s training area in Barangay Poctan.

The old municipal building was heavily damaged by bullets in the week-long heavy fighting between government troops and the extremists. The Maute group tried to occupy the government building in November 2016 and successfully hoisted their black ISIS (Islamic State of Iraq and Syria) flaglets there.

Today, peace has reigned again in the town, according to Ronda.

(We seldom get to celebrate Independence Day because of security. If not for the 49th IB, we could not celebrate it like this.)

After the flag raising, 10 soldiers from the 49th IB received awards for killing Owayda Benito Marohomsar or Abu Dar in a military operation last March.

Abu Dar reportedly replaced Abu Sayyaf leader Isnilon Hapilon, the appointed emir (leader) of the IS in Southeast Asia who led the siege of Marawi City in May 2017.

Hapilon was killed in October 16 of the same year at the height of the fighting in the area.

(Being a hero doesn’t mean you have to be a soldier or teacher or a government worker. All of us are heroes in our everyday lives.)

Villanueva urged residents of Butig to continue cooperating with the local governmen to maintain the peaceful life they now enjoy. (Editor: Eden Estopace)