Facebook photo leads to arrest of rape-slay suspect in QC 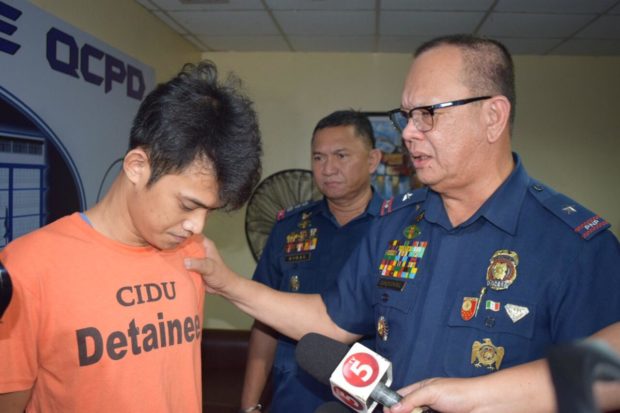 QCPD director Brig. Gen. Joselito Esquivel Jr. on June 12, 2019 talks to the suspect in the rape and murder of an 18-year-old Grade 12 student in Quezon City. Photo from QCPD

MANILA, Philippines — A Facebook photo of a rape-slay suspect showing him wearing a necklace found at the crime scene was among the evidence that led to his arrest, police said Wednesday.

Esquivel said in a QCPD report that the suspect was arrested at a room he rents in Barangay Payatas B around 10 p.m. on June 10.

According to police, a witness smelled a foul odor coming from the room of the victim on June 7, which prompted her to peep into the partially opened door of the room.

The witness then saw the victim lying on her bed with no undergarments.

Police then retrieved the body of the victim upon the report of the witness and found that she had sustained multiple stab wounds on the neck, left arm, and left side of her body.

An examination on the victim’s body also showed she was raped, according to police.

During the investigation, police said they have invited for questioning the victim’s neighbors, including the suspect. Investigators noticed that the suspect was uneasy and suspicious during the interrogation, prompting them to concentrate the probe on him.

Upon checking the social media account of Domingo, police found a photo of him on his Facebook account wearing the same necklace with a dog tag like the one recovered in the room of the victim.

Another witness also claimed seeing the suspect coming out of Dacillo’s room the same day the body was found. Operatives of the QCPD Criminal Investigation and Detection Unit and Batasan Police (PS-6) then launched the arrest.

Police said the suspect also pointed them to the undergarments of the victim, which he concealed in Dacillo’s room, and to her cellphone and keys he threw to a creek in Barangay Commonwealth.

Further investigation also showed that the suspect has a standing warrant of arrest for drug charges.

Cases for robbery with homicide and rape were filed against the suspect before the Quezon City Prosecutor’s Office. (Editor: Julie Espinosa)