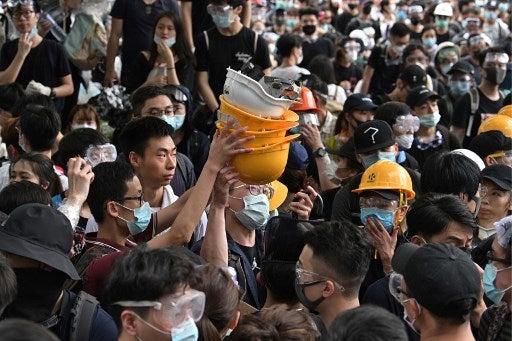 Protesters occupy the roads near the Legislative Council and government headquarters in Hong Kong on June 12, 2019.  AFP

HONG KONG, China — Demonstrators have again taken to the streets in Hong Kong, massing in the heart of the city to oppose a controversial bill that would allow extraditions to mainland China.

After record crowds rallied on Sunday,  tens of thousands of mostly young people and students flooded major roads on Wednesday calling on the city’s pro-Beijing leaders to scrap the proposal.

The issue has plunged the business hub into a political crisis as opposing sides battle for Hong Kong’s future.
What’s the law about?

The city’s government is pushing a bill through the legislature that would allow extraditions to any jurisdiction with which it does not already have a treaty — including mainland China.

They say it is needed to plug existing loopholes and prevent Hong Kong from becoming a bolthole for fugitives.

Leader Carrie Lam says safeguards are in place to protect free speech, and to ensure political cases will not be affected by the extradition law.

She also argues that the law meets international standards for human rights, and that only serious crimes that carry sentences above seven years will be considered.

Why do people object?

Fears center on getting tangled up in China’s opaque and politicised courts — whether it be the city’s 7.3 million inhabitants or those just passing through the airport.

A broad cross-section of society has opposed the legislation, including lawyers and influential legal bodies, business figures and chambers of commerce, journalists, activists and western envoys.

But the extradition furore is just the latest chapter in what many see as a battle for the soul of Hong Kong.

For the last decade the city has been convulsed by political turbulence between the pro-Beijing authorities and opponents who fear a resurgent China is stamping on the city’s unique freedoms and culture.

Yes. But under the 1997 handover agreement with Britain, China has agreed to a 50-year “one country, two systems” deal where Hong Kong is able to retain key liberties, such as freedom of speech and an independent judiciary.

The city’s courts and rule of law, built around the British legal system, are key to the financial hub’s economic success.
But there are accusations Beijing is reneging on that deal, moving to tamp down on opponents and reduce liberties long before the deadline expires in 2047.

Is this the end of Hong Kong as we know it?

The government insists it isn’t and people have wrongly predicted the death of Hong Kong before — particularly in the run up to the 1997 handover to China.

But opponents are painting the consequences of the extradition law in cataclysmic terms.

“The credibility of Hong Kong is now on the line,” Tara Joseph, president of the American Chamber of Commerce in Hong Kong, said on CNBC after Sunday’s march which organizers said drew one million people.

At the heart of the concerns is the idea that Beijing might be able to pursue locals and foreigners alike inside Hong Kong’s boundaries, ending the city’s unique status as a safe business gateway to China.

The US, which is currently engaged in an increasingly rancorous trade war with China, said the law “could damage Hong Kong’s business environment and subject our citizens residing in or visiting Hong Kong to China’s capricious judicial system”.

Carrie Lam has shown no signs of backing down, refusing calls to withdraw the bill.

A vote had been expected for June 20. But on Wednesday, in the face of the fresh protests, the city’s legislature announced it would delay a lengthy final debate.

In scenes echoing the Occupy movement in 2014 that shut down swathes of the city for months, black-clad demonstrators brought the heart of the city to a standstill by swarming major roads and junctions.

Despite the strength of public feeling, the expectation is that the bill will be pushed through. Although a nominal victory for Beijing, observers warn such a move would further polarize society and could convince people to abandon peaceful protest altogether.

The failure of huge pro-democracy protests four years ago to win any concessions has already pushed many younger Hong Kongers to more hardline fringes, and police fought angry battles with small groups of protesters on Sunday.

“Many people, especially the young, seemed to have become fairly disillusioned,” she said. /ee