MOUNT PLEASANT, Iowa – President Donald Trump and Democrat Joe Biden spent Tuesday trading insults — sometimes in real-time — as they stumped across Iowa in split screen moments that could preview a ferocious fight ahead if the two men face off for the presidency next year.

Biden is atop the massive Democratic presidential field only because of his frequent attacks on Trump, the president said. 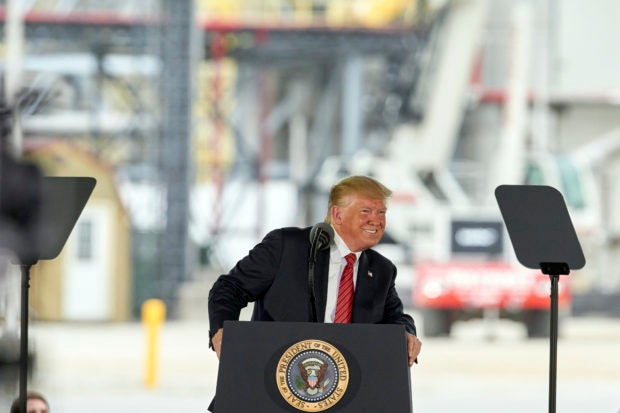 “Even the people that he’s running against, they’re saying ‘Where is he? What happened??

With a dose of exaggeration, he added: “He makes his stance in Iowa once every two weeks and then he mentions my name 74 times in one speech. I don’t know. That reminds me of crooked Hillary. She did the same thing.”

At almost the same moment in Mount Pleasant, Biden noted that his criticisms of Trump from earlier in the day were playing on TV screens when Air Force One landed in Iowa.

“I guess he’s really fascinated by me,” said Biden, who mentioned Trump by name about a dozen times during his first two events in Iowa.

“I find it fascinating.” He started to say more but then stopped himself, quipping, “My mother would say, Joey, focus. Don’t descend. Stay up.”

The back-and-forth laid bare the rising political stakes for each, even with the election about 17 months away.

Trump has zeroed in on Biden as a potential threat to his re-election chances and is testing themes to beat him back.

Biden, meanwhile, is campaigning as a front-runner, relishing the one-on-one fight with Trump while making sure he doesn’t ignore the demands of the Democratic primary.

“I’d rather run against Biden than anybody,” Trump told reporters on the White House lawn.

“I think he’s the weakest mentally and I like running against people that are weak mentally.”

Biden began the day in Ottumwa, the heart of Wapello County, a meat-packing and agricultural manufacturing center Trump was the first Republican to carry since Dwight D. Eisenhower.

It’s part of Biden’s dual track approach: campaigning for the caucuses while projecting himself as someone who can win in territory Trump snatched from Democrats in 2016, such as Michigan, Pennsylvania and Wisconsin.

The former vice president hit Trump on the economy — an issue the president often promotes as his chief strength in a time of low unemployment.

“I hope his presence here will be a clarifying event because Iowa farmers have been crushed by his tariffs toward China,” Biden said. “It’s really easy to be tough when someone else absorbs the pain, farmers and manufacturers.”

Biden added that Trump “backed off his threat of tariffs to Mexico basically because he realized he was likely to lose” in manufacturing states such as Michigan and Ohio. He broadly branded Trump “an existential threat to this country” and said his behavior is beneath the office of the presidency.

For Trump, the biggest concern in this state dominated by agriculture interests is trade. In Council Bluffs, he toured Southwest Iowa Renewable Energy, a facility that produces and sells the corn-based fuel additive ethanol.

“I fought very hard for ethanol but you proved me right,” Trump said, adding that he fought “for the American farmer like no president has fought before.” But he then again mocked Biden.

“He was some place in Iowa today,” the president said, “and he said my name so many times that people couldn’t stand it.”

Trump also is likely to try to sell farmers on the U.S.-Mexico-Canada trade deal, which remains to be ratified by lawmakers in each country. /gsg