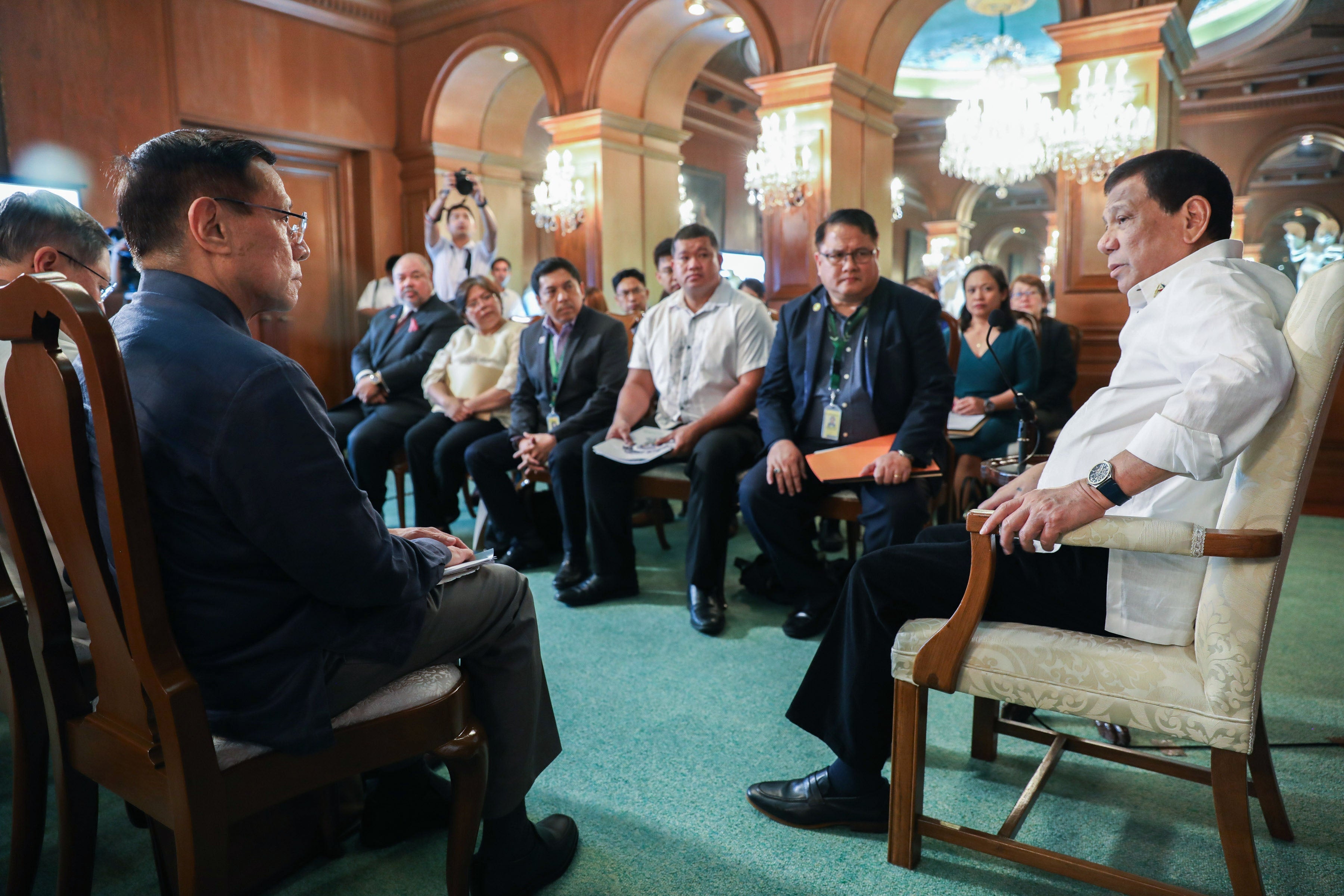 ‘CLEAN SLATE’ President Duterte meets with Health Secretary Francisco Duque III (left) and PhilHealth officials led by its acting president, Roy Ferrer (opposite Duque), at the Palace on Monday. The President demanded the resignation of the entire PhilHealth board in the wake of the controversy hounding the state health insurance company. —MALACAÑANG PHOTO

MANILA, Philippines — President Rodrigo Duterte is considering a doctor-businessman to head Philippine Health Insurance Corp. (PhilHealth) as he ordered a full-scale probe of reports that its funds were misused to pay for ghost dialysis sessions.

The name of Dr. Jaime Tan Cruz was floated as a possible replacement for PhilHealth acting president Roy Ferrer after the President demanded the courtesy resignations of PhilHealth officials.

“[On Monday], he mentioned Dr. Jaime Cruz. He’s from the private sector … He’s waiting for the response of Jaime Cruz for the offer he made to him,” presidential spokesperson Salvador Panelo said.

Cruz is the chief executive officer of JTC Group of Companies, a corporation based in Metro Manila and Davao City, which operates branded food franchises.

Based on JTC Group’s general information sheet filed with the Securities and Exchange Commission in 2014, Cruz is the board chair. The company’s principal office is in Davao City. It also has an office in Pasig City.

Among its franchises are the Jollibee Foods Corp.’s fast-food brands Jollibee, Chowking, Greenwich and Red Ribbon.

According to the company’s website, it has at least 36 stores in Metro Manila and 13 stores in Davao City.

Established in 1986, the JTC group also built its own food concepts such as Times Square food court and Good Day convenience store.

Cruz was one of the businessmen who signed agreements on the sidelines of the President’s four-day working visit to Japan last month.

The controversy surrounding PhilHealth’s funds was among the issues discussed in the President’s meeting with the PhilHealth officials on Monday night.

The President demanded the courtesy resignations of the PhilHealth officials amid claims that funds were used to pay for nonexistent dialysis treatments of dead patients.

The officials have yet to submit their resignations, although the Palace said these would be “accepted undoubtedly” by the President.

In a text message to the Inquirer, Health Secretary Francisco Duque III said Malacañang had sought not only the courtesy resignation of Ferrer and the six PhilHealth board members who are presidential appointees but also that of other high-ranking officials, including senior vice presidents, vice presidents, area vice presidents and regional vice presidents.

Duque said that chief operating officer Ruben Basa would temporarily take over the firm’s operations, as ordered by Mr. Duterte. Basa will still serve as PhilHealth’s officer in charge until Malacañang decides whether to retain him.

Although the President trusted the integrity of Ferrer and the PhilHealth board members, the President still demanded their resignation “to have a clean slate absent any taint of irregularity in rendering services as well as implementing pertinent policies on health, including the Universal Health Care (UHC) Act.”

The President also tasked the National Bureau of Investigation with conducting a full-scale investigation into the alleged irregularities and past practices of the state health insurer.

The Palace, however, said the PhilHealth officials might be reappointed or given other positions depending on the results of the NBI probe, particularly if they are cleared.

“He (the President ) mentioned that if it was OK, they can be reappointed or given another position,” Panelo said. The President is tentative on it because there is no NBI report yet.”

In the meantime, second-level PhilHealth officials will run the agency’s operations.

Duque said one of the solutions currently being considered by the President to the fraud hounding PhilHealth was to tap the expertise of SGV & Co. “to help audit the operating and management systems of PhilHealth.”

Quoting Duque, Panelo said the Inquirer report that PhilHealth lost some P150 billion in fraudulent insurance claims was “malicious and baseless with respect to the amount.” The actual amount lost was around P300 million, Panelo said.

The Palace reassured the public that the Duterte administration would not tolerate any whiff of corruption in the state health insurer, and that no one will be spared in the probe.

The Health Alliance for Democracy (HEAD) in a statement demanded that PhilHealth account for all the unresolved fraudulent schemes. It cited reports of bogus claims on cataract operations and pneumonia.

Not resolving these cases would raise questions about the multibillion-peso government allocation to PhilHealth for the implementation of the UHC law.

Outgoing Sen. Antonio Trillanes IV on Tuesday said the corruption in PhilHealth had exposed the President’s spurious campaign to stem irregularities in the government.

“Corruption still exists. Some have been uncovered, but many others have not,” Trillanes said in a press conference. —With reports from Inquirer Research, Mariejo S. Ramos and Marlon Ramos