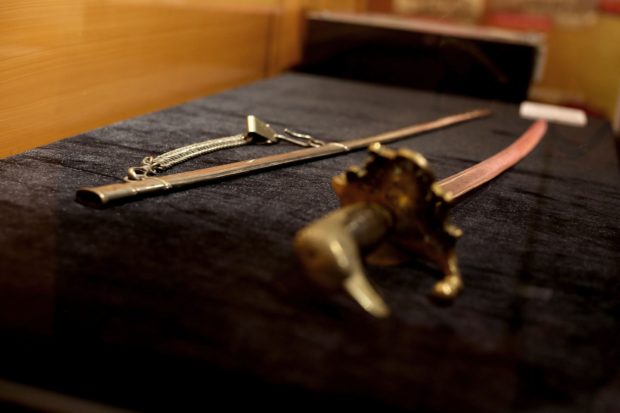 SHEATH FOR AGUINALDO’S SWORD The sterling silver scabbard for Aguinaldo’s sword made by Pastor and Benigno Santi is displayed at Aguinaldo Shrine. PHOTO BY RICHARD A. REYES

As a young boy, he would tag along with his aunt, an “alahera” (jeweler), whose regular clients included Doña Maria, wife of Gen. Emilio Aguinaldo, the first president of the Philippine Republic.

“I would just sit there while the two ladies chatted for hours. When Don Emilio came around, still in his pajamas, I’d say, ‘Mano po, ninong,’ and he would always reach for his pockets for a coin,” he said.

It was the 1940s and the wars against Spain and the United States were long over. Aguinaldo, who most people in the town later called “ninong” (godfather), spent his time in the mansion that would become a national shrine.

Santi’s family, on the other hand, owned Plateria de Kawit, the town’s jewelry shop, a few blocks away from the Aguinaldo mansion.

Today, it is known as Santi and Sons, a factory that employs about 100 people from Barangay Wakas and that specializes in emblem jewelry, like college rings and military badges.

It was Santi’s grandfathers, Pastor and his brother Benigno, who made the scabbard, out of sterling silver, for what was described as Aguinaldo’s “personal weapon.”

“One thing I’m proud of is that whenever we’re asked how long we’ve been in operation, I’d say even before the Republic of the Philippines was born,” said Santi’s son and fourth-generation jeweler, Michael, 40.

The weapon, also known as the Aguirre Sword, and the scabbard are kept in a glass case at Aguinaldo Shrine.

According to its label, the sword was forged from Toledo steel in Toledo, Spain, in 1869. It originally belonged to a Spanish general, Ernesto Aguirre, who dropped it while retreating during the 1896 battle in Imus, Cavite.

The battle launched the revolution that led to Aguinaldo declaring Philippine independence from Spain in 1898.

When Aguinaldo’s men found the sword, they gave it to the general as some sort of a “trophy,” Michael said. 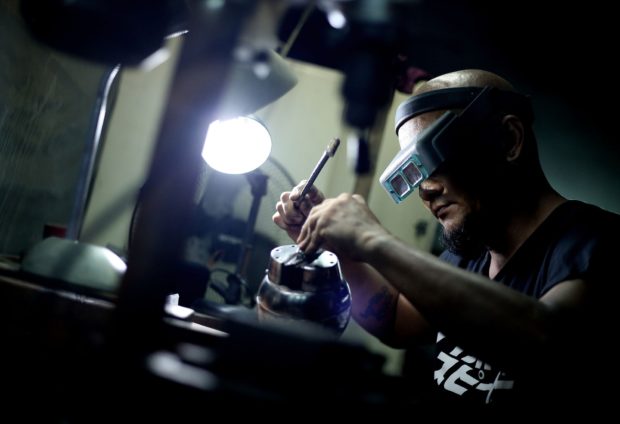 Jeweler Emil Corpuz sets a gemstone on a ring at the Santi and Sons workshop in Kawit. INQUIRER PHOTO / RICHARD A. REYES

It was not known if Aguinaldo had paid for the scabbard but Santi, citing stories passed on to him, said the only thing that Aguinaldo asked the Santi brothers was to make it “as nice as possible.”

“We’re not often asked about [the scabbard, but] I’m happy whenever we get to tell the story to visitors,” Santi said.

Aside from the scabbard, Michael said his great grandfathers also made the buttons and decorations for the uniforms of Aguinaldo’s army.

Through the years, Santi and Sons has gone into making college rings—a trend that boomed during the American occupation—corporate jewelry, and wedding rings.

But Michael said the demand for college rings, in particular, had decreased with people losing interest in spending on a piece of school memento.

“Sadly, what we really compete with now are iPhones, iPads, a trip to Hong Kong, or down payment for a new car,” he said.

Michael said it was one of the most difficult times, losing not just millions of pesos worth of investment but an entire archive of designs and molds probably as old as the Philippine Revolution. 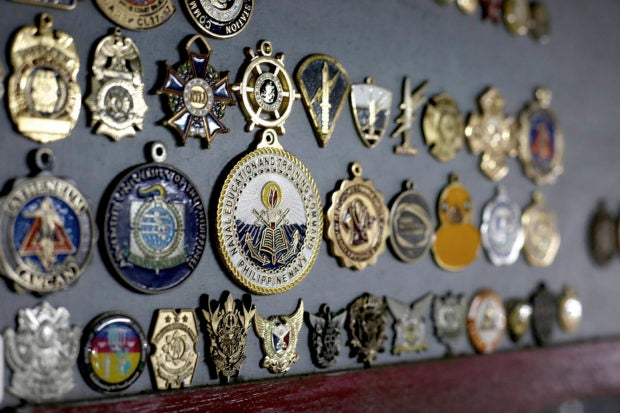 Other works in metal displayed on a wall at the shop that has been trading since 1906.
INQUIRER PHOTO / RICHARD A. REYES

He said that while they used computers to render the designs and make the wax moldings, they still refused mechanized mass production and kept the “old-fashioned” way of engraving, setting the stones and polishing.

Just like in any battle, Michael said, the family was trying to recover from the hardest blows.

“Nobody else here does this and I think that alone is enough reason to keep going on,” he said.