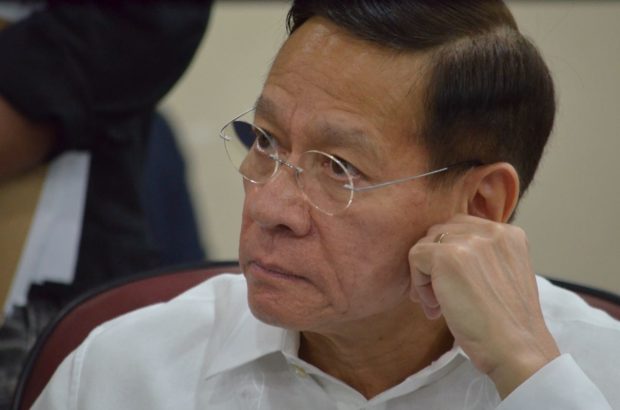 MANILA, Philippines — Health Secretary Francisco Duque III admitted on Tuesday that the father of one of WellMed Dialysis Center’s co-owners called him up as an Inquirer report of its alleged “ghost dialysis” scheme was brought to light last week.

But why would Bryan Christopher Sy’s father immediately turn to Duque? It turned out that Duque was one of Sy’s godfathers at his wedding in 2014.

“That’s a fact I won’t deny. But we do not have any relationship, even professionally. I don’t talk to them,” the secretary told the Inquirer on Tuesday.

As head of the Department of Health, Duque also serves as ex-officio chair of Philippine Health Insurance Corp. (PhilHealth).

On Tuesday, the National Bureau of Investigation charged 10 people, including WellMed vice president Sy, with estafa and falsification of documents in the Department of Justice (DOJ) in connection with P800,000 worth of “ghost” claims.

When the story broke on Thursday, Duque said Sy’s father, his former classmate at the University of Santo Tomas, phoned him.

“I told him straight: ‘Whatever you have done there, I couldn’t do anything about it. That is your responsibility,’” Duque said.

He pointed out that until that phone call, he had “zero communication” with the Sys.

Asked whether President Rodrigo Duterte knew that he was Sy’s “ninong,” Duque said: “I haven’t mentioned it to the President since I have yet to talk [to him] about the overpayments and the fraud.”

Following the Inquirer’s series on “ghost dialysis” treatments, overpayments and other fraudulent practices, and a “mafia” behind the padded claims, the President met with PhilHealth top officials on Monday night and asked for their courtesy resignation.

He also set a personal 10-day deadline to get to the bottom of the mess in PhilHealth, according to Duque, who was present during the meeting.

The whistleblowers, former WellMed employees Liezel Aileen S. de Leon and Edwin Roberto, were also charged by the NBI in the hope they would later be discharged to serve as state witnesses.

Only Sy, De Leon and Roberto were under NBI custody.

Roberto claimed that Sy had ordered him to make PhilHealth claims for dead patients. Roberto then directed De Leon to prepare the claims.

Sy and his lawyers have repeatedly denied the charges, saying the whistleblowers were the real culprits.

Before he was taken to the DOJ for inquest, the NBI brought Sy to Manila Regional Trial Court Branch 20 after his wife, Therese Francesca Tan-Sy, filed a petition for habeas corpus seeking his immediate release.

“It’s a fiasco,” Sy told the Inquirer in an interview, recalling that the day he first learned about the Inquirer report on the allegations against his company, he knew that his image in the public eye was “dedbol” (Filipino slang for dead).

Sy’s lawyers believe that he should not have been arrested since the scope of the investigation was 2015 to 2018.

The NBI justified the arrest as a case of hot pursuit under Rule 113, Section 5(b) of the Rules of Court. The rule allows warrantless arrests “when an offense has just been committed” and the arresting officer “has probable cause to believe based on personal knowledge of facts or circumstances that the person to be arrested has committed it.”

Despite WellMed being flagged for its fraudulent practices, it still received until this month payments from the state health insurance firm, according to PhilHealth data. This contradicted PhilHealth officials’ statement that payment to WellMed had stopped since February.

Based on records provided by an insider and information from PhilHealth’s “dashboard,” the state insurer paid the kidney treatment center in Novaliches, Quezon City, more than 255 dialysis claims. Of these claims, 184 were for treatments costing about P3.2 million done from February to June.

Duque said PhilHealth had already identified one office that might be accountable for the ghost dialysis scheme.

“The accreditation committee is where we think there has been an oversight. That is subject to investigation,” he said. “We’re ordering a revamp of that particular unit, after that we’ll look at other operating units for continuing reorganization.”

Duque belied the claim of PhilHealth insiders that P154 billion was lost to overpayments and fraud from 2013 to 2018. PhilHealth officials earlier noted that the amounts considered overpayments were actually “efficiency gains.”

Based on data from the firm’s Fact-Finding Investigation and Enforcement Department, Duque said a total of 23,233 claims from hospitals and health care professionals, from 2015 to 2018, were tagged as possibly fraudulent.

At an “average value claim” of P10,000, Duque said the amount possibly lost to fraud stood at only P232 million, or nearly just a percent of the total P433-billion benefit payout over the same period.

PhilHealth insiders came up with the P154 billion by using the 2014 audit observation memorandum of the Commission on Audit for Northern Mindanao, which found that the insurance firm overpaid in 20 percent of all cases it processed.

They extrapolated the data to arrive at an overpayment of P102.5 billion. They used the global estimate of a 10-percent loss to health care insurance fraud to come up with P51.2 billion, which they said was lost to scams.

“An overpayment cannot be determined unless you do a hospital-to-hospital analysis or assessment. We can’t say that what is true for Northern Mindanao is also true for the entire Philippines. That is a reckless conclusion,” Duque told the Inquirer.

He admitted, however, that the fraudulent practices of some hospitals and doctors would not have prospered if there were no collusion with erring officials.