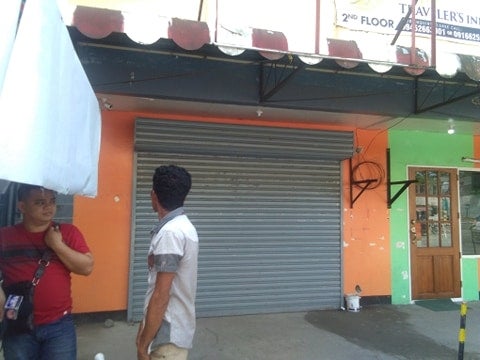 PONZI SCHEME CRACKDOWN The Kapa office in Tacloban City remains closed on Tuesday following the June 10 raid by the Philippine National Police and the National Bureau of Investigation. —JOEYA. GABIETA

Rey Rosendal went to the office of Kabus Padatoon (Kapa) Community Ministry International in Tacloban City, Leyte province, on Tuesday to get his P15,000 “blessing.”

To his dismay, the office in Marasbaras District was closed and appeared to have been abandoned.

“I came here to get my money. I did not know that it was closed already though my son told me that he heard about it,” said Rosendal, 55, a resident of Barangay Cabalawan in Tacloban.

Agents of the National Bureau of Investigation also found the Kapa office empty the day before. But they managed to find several documents and certificates that might be used to file charges against Kapa officials.

The NBI raided other Kapa offices in Cebu and Nueva Vizcaya provinces on Monday, or two days after President Duterte ordered the agency and the police Criminal Investigation and Detection Group to investigate and, if warranted, shut down Kapa and other groups for alleged involvement in investment scams.

Kapa, a Surigao del Sur-based religious corporation, was soliciting investments from the public by encouraging them to “donate” any amount in exchange for a 30 percent monthly return.

In March, the Securities and Exchange Commission (SEC) issued the firm a permanent cease-and-desist order. On Monday, it announced that the Court of Appeals had frozen Kapa’s bank accounts and other assets on June 4.

Kapa has at least 5 million members, its founder and pastor, Joel Apolinario, has claimed.

The SEC has learned that the minimum investment donation was P10,000, translating to at least P50 billion in payments to Kapa from its members who are to receive a total monthly payout of P15 billion.

It said the monthly payout was unsustainable because Kapa had assets of less than P500,000 and earnings of P5,784 in its latest filing in 2017.

Rosendal has donated a total of P25,000 since March 22. He was supposed to get his blessing worth P15,000 at the Kapa office in Tacloban on Tuesday, but it had already shut down.

“I hope they will still operate and have my money back which I was supposed to use for the repair of my house,” he said.

A woman, who is from Pinabacdao town, Samar province, was supposed to get P45,000, which covered three months in interest for her P50,000 investment which started in March. She, too, was shocked when she learned about the office closure.

“It’s supposed to be my first blessing. I hope I can still receive it,” said the woman, 32, who declined to give her name.

She said she was encouraged to join Kapa by her employer who invested P100,000 to Kapa and was able to receive his monthly interest.

In Cebu, Kapa opened in April after buying a beachfront property in Barangay Poblacion, Compostela town, for P12 million from the family of Josephine Ouano.

Ouano, 68, was later hired as a cook in the canteen of the compound.

She was the only one around when agents of NBI-Central Visayas arrived there past noon on June 10. By then, the place had already been abandoned after armed men robbed and burned two of the three buildings last Saturday.

The NBI raid was based on a search warrant issued by Judge Marivic Balisi-Umali of the Regional Trial Court in Manila for violation of Section 26 of the Securities Regulation Code of the Philippines.

Named respondents or subjects in the warrant were Kapa founder Apolinario and Christopher Abad, Kapa area manager in Cebu. Both were not in the compound during the police and NBI raid.

Banac urged complainants on Tuesday to get in touch with law enforcement agencies to help strengthen the case against those behind Kapa.

“We only recovered shredded documents, some of which seemed to contain lists of investors and donors,” said Clyde Cabasag, NBI special agent.

A few hours after the NBI raid on the Kapa compound in Cebu, five Kapa members arrived.

They were shocked when they saw that the office had been cordoned off and a tarpaulin announcing its closure was put up in front.

Refusing to give their names, they said they found nothing wrong with Kapa and were all worried that they would no longer get their money back.

Some came from the neighboring city of Danao, while others were from Cebu City, 24 km from Compostela.

Like them, Ouano found nothing wrong with Kapa. She said about 300 people received their “blessings” daily in the Kapa office, including a Catholic priest from Toledo City in western Cebu.

“I think they really are a religious group because they always start the day with prayers and songs before they start receiving their donations,” Ouano said. “Then we would hear names of people who were scheduled to receive their blessings,” she added.

She was supposed to join on June 15 because she, too, wanted to enjoy the “blessing.” —With reports from Jeannette I. Andrade and Villamor Visayas Jr.