Presidential Spokesperson Salvador Panelo said Duterte agreed with the plan of Transportation Secretary Arthur Tugade to transfer domestic flights from Naia to Sangley Point, a former US naval facility turned over in the 1970s to the Philippine Navy and Philippine Air Force. 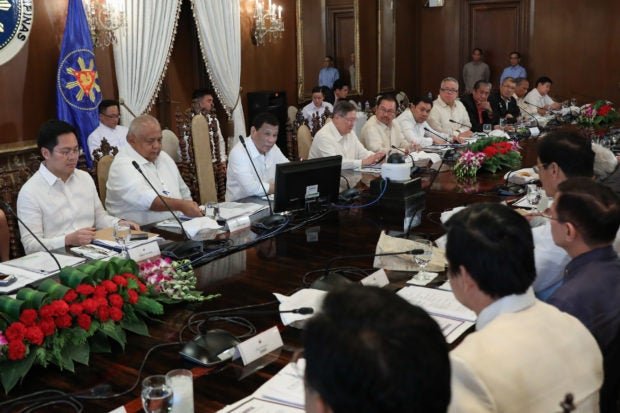 President Rodrigo Duterte presides over the 38th Cabinet Meeting at Malacañan Palace on June 10, 2019. Transportation Secretary Arthur Tugade, during the meeting pushed for the utilization of Sangley Point in Cavite for domestic flights to ease congestion at the Ninoy Aquino International Airport. ROBINSON NIÑAL JR./PRESIDENTIAL PHOTO

“To ease congestion at the Ninoy Aquino International Airport, [Tugade presented] the plan to transfer general aviation or domestic flights to Sangley Airbase,” Panelo said in a statement.

Tugade presented the plan during the 38th Cabinet meeting in Malacañang on Monday night.

“Tugade reported that he had already initiated the testing of ferries that can operate from Mall of Asia to Sangley within 18-24 minutes,” Panelo said.

“The President directed the operations in Sangley Point to start immediately,” he added.

On security concerns, Panelo said “Duterte prefers that airport security be handled by a single entity, either from the military or civilian force.”

“Sec. Tugade will be preparing an appropriate executive order for the President’s consideration,” he added.

During the Cabinet meeting, Panelo said Duterte “expressed dismay and hinted at its revamp” after his surprise inspection at Naia Terminal 2 on Monday morning following flight delays and cancellations due to a lightning alert.

Duterte has apologized to affected passengers and vowed to come up with a remedy within a month. (Editor: Gilbert S. Gaviola)