Cubao-Makati in 5 minutes? 'Duterte has something on his sleeves’ | Inquirer News
Close
menu
search

Cubao-Makati in 5 minutes? ‘Duterte has something on his sleeves’ 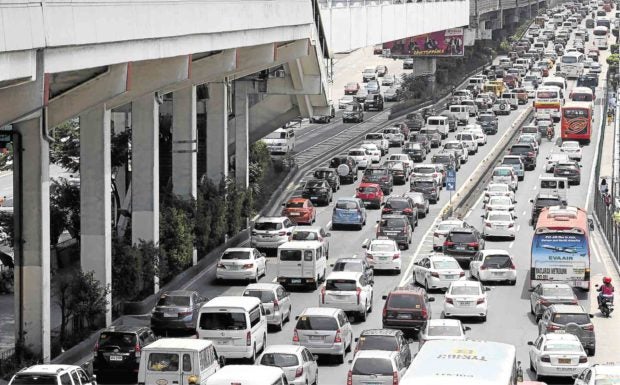 MANILA, Philippines — President Rodrigo Duterte has something up his sleeves when he said travel time from Cubao in Quezon City to Makati City could be reduced to just five minutes.

“You don’t have to worry about traffic. Cubao and Makati is just about 5 minutes na lang,” he added.

Asked what concrete plans the President has in mind to fulfill his promise, Presidential Spokesman Salvador Panelo said: “Surprise! He has something on his sleeves.”

Panelo, however, failed to elaborate his remark.

The Palace official cannot also tell if Duterte’s confidence stemmed from the possibility that the 18th Congress, which was dominated by pro-administration lawmakers, can now grant him emergency powers to solve traffic along Edsa.

“Congress knows what is the problem so it should know what to do to respond to the situation. After all, they are there, just like the President, to serve the Filipino people. And that includes putting the riding public in a convenient situation,” Panelo said.

The President first issued the promise in March during a campaign rally of the ruling PDP-Laban party in the province of Isabela.

“Build Build Build in about… Give me until June, July or the latest September – Cubao, Makati, we’ll give you a ride in five minutes,” Duterte said.

Duterte previously admitted he failed to fulfill his campaign promise to ease Edsa traffic due to Congress’ refusal to grant him emergency powers.

READ: Duterte: I’ve fulfilled every promise I made except solving Edsa traffic