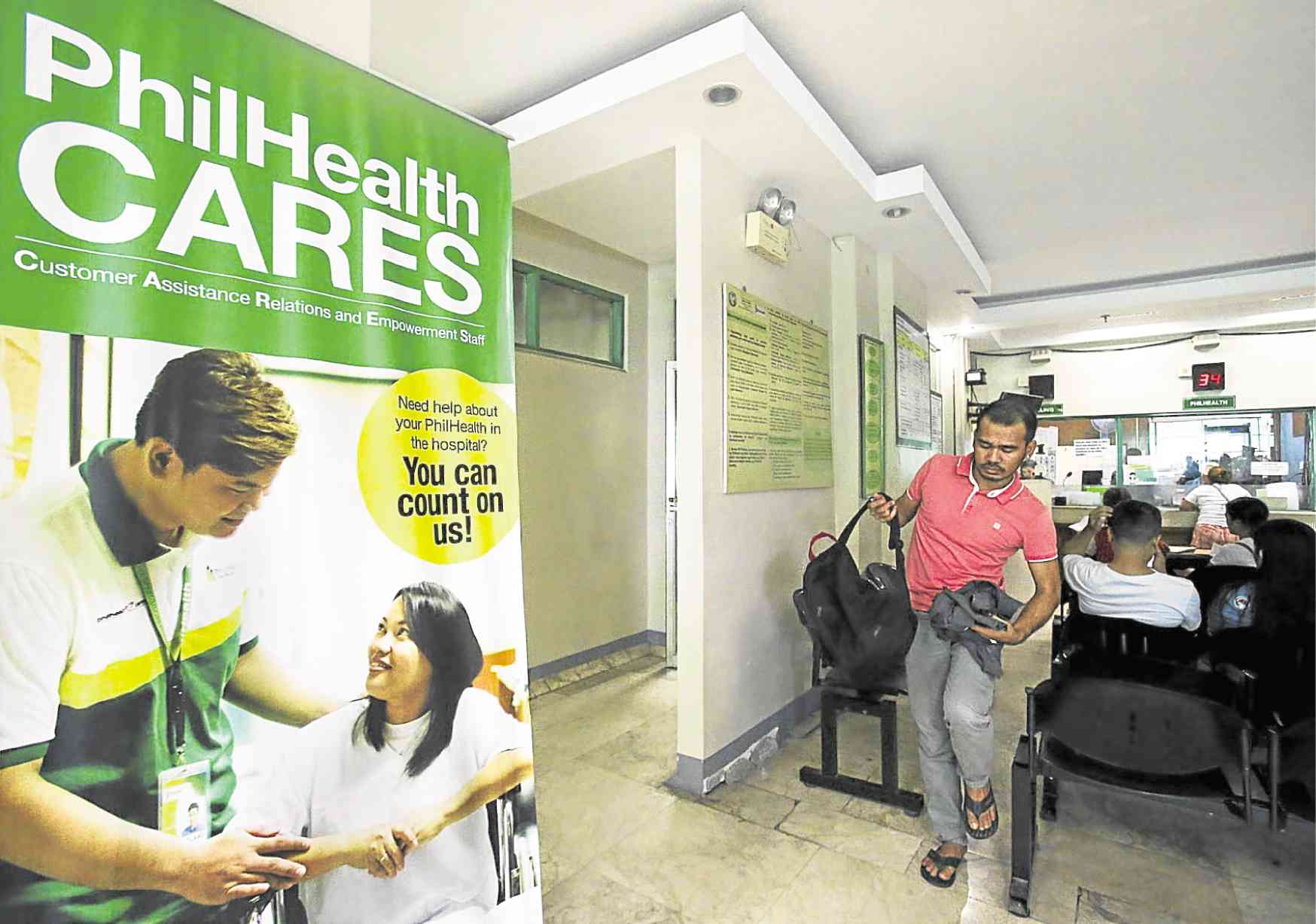 IF THE SLOGAN SAYS SO PhilHealth has staff members who are ready to assist patients who have concerns with their health insurance, so says the sign at Rizal Medical Center in Pasig City. —LYN RILLON

More than 757,000 people got sick with pneumonia in 2018, according to claims made by hospitals and paid for by Philippine Health Insurance Corp. (PhilHealth), the state insurance company. The number is staggering as only a little more than 295,000 suffered from the community-acquired strain of the respiratory disease in 2010.

As a result, PhilHealth paid hospitals last year P10.94 billion for the treatment of pneumonia, or a fivefold increase from the P2.04 billion it spent in 2010.

Interestingly, despite the number of cases reaching “epidemic proportions,” the Department of Health (DOH) had not declared an outbreak of pneumonia, a lung infection that can be prevented by vaccine. It even dispelled reports of an outbreak in January.

Apart from the huge number of people who contracted the disease, what worries former and current senior health officials is that PhilHealth has been overpaying for pneumonia cases, which may have been fraudulently claimed by some hospitals.

Officials, who spoke to the Inquirer on condition that they not be named for their safety, said the prevailing all-case rates (ACR) payment mechanism was one of the ways the health insurance company had lost a total of P154 billion since 2013. Of the “losses” over the past six years, P102.5 billion was due to overpayment.

The sources came up with the amount using the 2014 audit observation memorandum of the Commission on Audit (COA) for Northern Mindanao, which found that PhilHealth had overpaid in 20 percent of all cases it processed.

Another P51.2 billion was lost to fraud based on the global estimate of a 10-percent loss as a result of health care insurance scams, they said.

PhilHealth has been paying hospitals a set rate for a particular disease since it abandoned a fee-for-service scheme.

For example, patients diagnosed with community-acquired pneumonia are covered for P15,000 each, while those who contracted the more severe strain are allotted P32,000. Since 2010, pneumonia has consistently ranked as the most prevalent disease reported by hospitals.

Those with acute gastroenteritis, the second leading case reported by hospitals and processed by PhilHealth, are covered for P6,000 each.

No review of ACR, upcasing

While some countries also follow the ACR scheme, PhilHealth insiders pointed out that the lack of review of the scheme and instances of “upcasing” resulted in the insurance company shelling out billions of pesos in overpayments.

Upcasing occurs when hospitals submit claims for pneumonia even if patients may have had only cough or cold.

With this problem, the officials wondered how PhilHealth could be trusted to manage efficiently the universal health care program’s initial fund of around P257 billion.

They lamented that over the years, the PhilHealth management seemed to have turned a blind eye to the situation even as a number of hospitals have taken advantage of it.

The hospital schemes range from upgrading ailments of patients and admitting beyond their bed capacity to treating dead patients.

PhilHealth spokesperson Shirley Domingo denied that the state-run insurance provider was not doing anything and that it was losing funds.

Domingo pointed out that as of April, PhilHealth had 8,925 pending cases against health care institutions and professionals who committed various infractions.

PhilHealth also has “robust finances,” posting last year a net   income of P11 billion and a benefit payout of P120 billion, according to Domingo.

Health Secretary Francisco Duque III, who is also PhilHealth chair, vowed in May last year to look into hospitals upcasing their claims.

DOH records showed there were more than 454,000 reported pneumonia cases in 2017, Duque said. In contrast, PhilHealth processed 707,133 pneumonia claims for that year.

Comparing the records and processed cases, the state insurer incurred a loss of P3.2 billion as it spent P10.2 billion for pneumonia cases alone in 2017, he said.

Incidentally, in 2017, PhilHealth recorded a net loss of P4.7 billion. But its restated unaudited financial statement showed that it posted a net income of P237.2 million.

For a number of years, the COA has flagged PhilHealth for its overpayments.

In Bukidnon, it reported that while Bukidnon Provincial Hospital-Maramag charged all 10 patients who contracted pneumonia a total of P56,618, PhilHealth still paid P150,000, an excess of P93,382. Ermavi Clinic billed a patient with acute gastroenteritis for P2,798.90, but PhilHealth paid P6,000.

The overpayment is not confined to ailments. It is also evident in medical procedures covered by PhilHealth.

In Cagayan de Oro City, the COA flagged PhilHealth for paying Capitol University Medical City Foundation the maximum P4,000 for hemodialysis when the hospital charged its patient only P500.

Other reports showed that some dialysis centers were claiming payments on behalf of patients who had already died.

But according to Israel Pargas, PhilHealth senior vice president for the health finance policy sector, the cases should not have been considered overpayments. He said the payment provider mechanism being used by the insurance company was “designed that way.”

“It works on averages. So, you may win in some, you may lose in some. But the hospital should make its operations more efficient so it could win in more,” Pargas said.

Because of the no-balance billing policy implemented by all government hospitals and some private hospitals, no other fee is charged to patients, especially indigents.

So if a patient is billed P30,000 and PhilHealth’s benefit claim for that disease is only P15,000, the remainder is shouldered by the insurance company.

“Where will they get [the remainder]? Then it can come from the gains from what is being called ‘our overpayment,’” Pargas said.

Under Republic Act No. 7875, or the National Health Insurance Act, which created PhilHealth, members are provided with benefits, such as subsidy for room and board, medicines and laboratory fees.

Procedures like hemodialysis, normal and cesarean births, as well as chemotherapy, are also covered.

Insiders wondered how PhilHealth could determine if the submitted claims, like those for pneumonia, were not fraudulent when it had cut by a third the time it was processing payments.

“PhilHealth pays blindly. Whatever the hospital says, we process. After paying, that’s the only time we validate. How can we validate  a claim form when there are no clinical charts attached?” said a high-ranking PhilHealth official, who requested anonymity for fear of his life.

From the 60 days mandated by law for PhilHealth to process claims, Pargas said, it was now able to pay hospitals in 20 days because it had digitized its system and shifted to a “postaudit” scheme.

PhilHealth has also required hospitals to submit electronically Claims Form 4, which identifies a patient’s symptoms and indicates the medicines given and laboratory tests done on him.

A postaudit occurs only when a hospital makes unusual claims for a particular disease, Pargas noted.

“We pull out their claims [record]. We look at the pattern and analyze it. If we see something unusual, we question the hospital and check to see if they are not following treatment guidelines and policies,” he said.