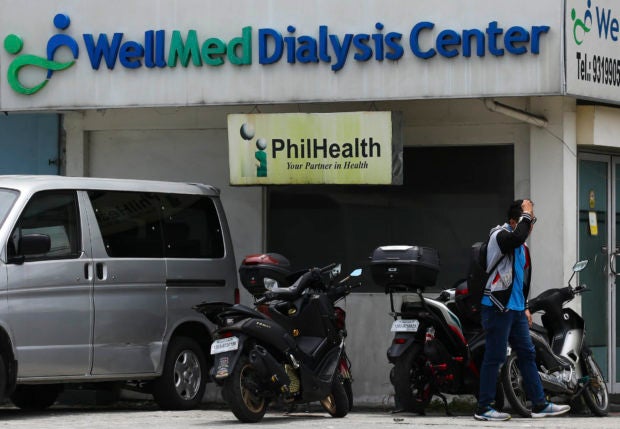 A former employee of WellMed Dialysis & Laboratory Center Corp. in Novaliches, Quezon City, accuses his former employer of filing PhilHealth claims for dialysis sessions on behalf of a patient who had already died and said that PhilHealth continues to pay without verifying the claims. INQUIRER file photo / LYN RILLON

In a Philippine Daily Inquirer report, Edwin Roberto, a former employee of WellMed Dialysis & Laboratory Center Corp. in Novaliches City exposed that Philhealth continuously paid for claims of the dialysis center on behalf of a client who had already died.

PhilHealth acting president and CEO Dr. Roy Ferrer said they have filed an administrative complaint against the dialysis center in a move to show that the corporation does not condone such practices.

“The corporation does not condone such acts as it undermines the people’s entitlement to one of their basic rights as human beings — the right for appropriate medical care,” Ferrer said in a press conference.

“In relation to this case, the corporation has filed 28 counts of administrative claims for non-admitted treated patients, misrepresentations by furnishing false or incorrect information, and breach of warranties of accreditations performance against the mentioned dialysis center,” he added.

Ferrer added that 12 other cases are also being evaluated for filing.

“We have initiated several actions last year pa. Our fact finding investigation.. conducted investigation and they have finished their investigation as early as as November to December 2018. They have filed cases before the prosecution. We have filed numerous cases against doctors themselves, we have four doctors, and the facility itself,” Del Rosario said.

Del Rosario added that its National Capital Region office has also been directed to file a criminal case against the dialysis center.

Moreover, PhilHealth Senior Vice President Israel Francis Pargas added that payment for claims  filed by the dialysis center has been suspended since February.

“There’s already a move to withdraw the accreditation and we’re just awaiting for the results of theses cases that were filed against the particular facility. But we also have provided a suspension of payment of all claims being filed by the particular hospital since February,” Pargas said.

Call for whistleblowers to come out

Ferrer encouraged the whistleblowers, handled by Harry Roque, to come out. He gave assurances that they will be protected once they choose to do so.

The PhilHealth executive also encouraged the whistleblowers, handled by lawyer Harry Roque, to come out, ensuring that they will be protected once they choose to do so.

“We encourage whistleblowers to come out in the open and my view, even modern corporation with modern technology.. it’s really difficult sometimes to detect fraud so that’s why we are encouraging the public and the people to report to us any fraudulent activities that you observe with the claim processing of PhilHealth. If you think it’s fraud, report it,” Ferrer said.

Ferrer said they are also intensifying their efforts to cleanse their ranks, adding that several middle managers have already been suspended for various violations.

“We would like to tell everyone that PhilHealth is financially stable. Our operation is stable,” Ferrer said. (Editor: Jonathan P. Vicente/kga)