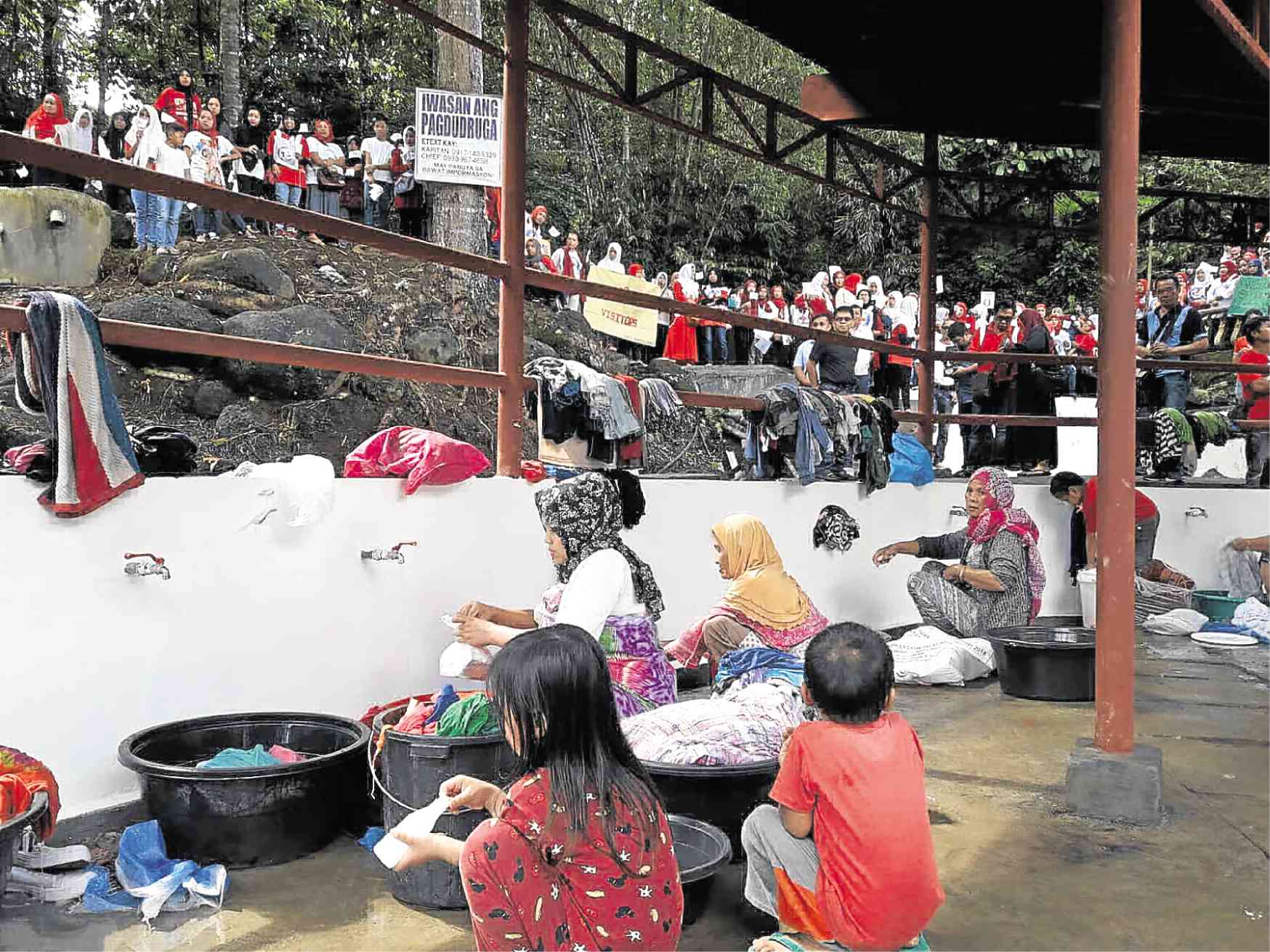 LAUNDRY DAY Residents of Barangay Bualan in Saguiaran, Lanao del Sur, wash their clothes in a newly turned over water and sanitation facility in their community. Families living in temporary shelters in nearby Marawi City will also benefit from the project that will supply them clean water. —DIVINA M. SUSON

SAGUIARAN, Lanao del Sur, Philippines — Around 6,000 residents here will have easy access to drinking water after the International Committee of the Red Cross (ICRC) turned over on Monday a water and sanitation facility it set up at a spring in Barangay Bualan.

The facility will serve not only residents but also families displaced by the 2017 Marawi City siege now living in the transitory shelter site, Bahay ng Pagbabago, in Barangay Sagonsongan, Marawi, some 2 kilometers away from here.

Sen. Richard Gordon, also chair of the Philippine Red Cross (PRC), said both the PRC and ICRC would continue to help evacuees by asking President Duterte to fast-track the rehabilitation of Marawi.

“We went through a very deadly experience here in Marawi and since Day 1, we were already working on the streets to give the evacuees … water, food and psychosocial support. We will continue to help,” Gordon said in his message during the turnover.

Peter Maurer, ICRC president, led the turnover of the P4-million facility. This was Maurer’s second visit to the country since 2013, after Eastern Visayas was devastated by Supertyphoon “Yolanda” (international name: Haiyan).

In a statement, Maurer said: “This second visit affirms my view that the suffering people endure in natural and man-made disasters is universal. People lose loved ones. People lose their homes. Individuals and whole communities face an uncertain future.”

He said his visit to Marawi gave him a glimpse of a community “dealing with the physical and psychological impact of conflict.” Maurer said that during his discussions with top Philippine officials, he felt a “commitment and resolve to find effective, long-term solutions to humanitarian issues of concern, despite considerable constraints they deal with.”

“The people need to be able to count on the authorities to be responsive to their needs,” Maurer said.

Two years since the siege, 1,100 evacuees and residents of Lanao del Sur get their potable water from the water treatment facilities in the district hospitals of Tamparan and Baindong towns. Another 7,500 displaced residents from Marawi were also getting their water supply from the Marawi City Water District that was earlier rehabilitated by the ICRC following the siege.

Zenaida Macatanong, 60, a resident of Bualan village, said the spring that provided water for the facility had sustained the community even during long periods of drought.

Built just along the mosque entrance, the facility will play a crucial part for the “wudhu” (washing) rite among Maranaos before they enter the mosque to pray. Wudhu is the ritual washing performed by Muslims before prayer.

“I’ve been here for 60 years but we never ran out of water from that spring,” Macatanong said.

She was glad that the pavement around the facility had been covered with concrete so people no longer get muddy when fetching water.

“We endured the mud for 60 years, this is a very big help to us,” said Macatanong, whose husband, a regular attendee at the mosque, joined the ceremony on a wheelchair carried by his five grandsons.

Julficar Pangato, ICRC project monitoring engineer, said the project could also benefit residents of Marawi and the neighboring towns of Lanao del Sur during power interruption, since most of these neighboring areas depended on electric water pumps to draw water.