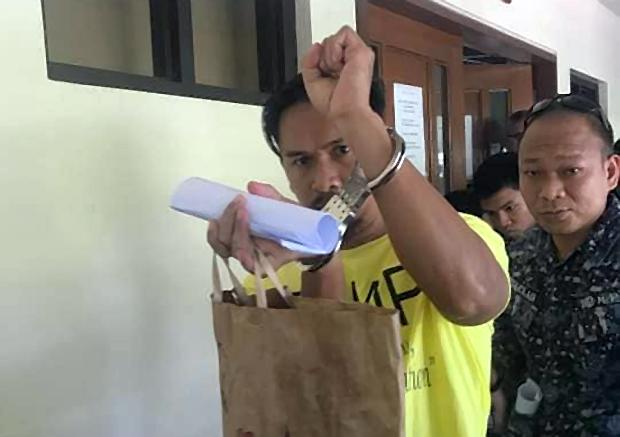 SAN PEDRO CITY, Laguna, Philippines — The family of labor organizer Marklen Maojo Maga has vowed to appeal his conviction for illegal possession of firearm and ammunition, calling the court’s decision a “bad precedent.’”

The Regional Trial Court (RTC) of San Mateo town in Rizal, on Monday, sentenced Maga, 41,  an organizer of the labor group Kilusang Mayo Uno (KMU), to 14 years in prison for violation of the Comprehensive Firearms and Ammunition Regulation Act.

Activists have decried the “pattern” of filing similar charges against peace consultants, including some who are in jail.

“This sets a bad precedent … This battle we are waging for Maoj is on behalf of all other unionists and activists in jail,” Maga’s wife, Eleanor de Guzman, said in a telephone interview on Tuesday, vowing to appeal the ruling by Judge Josephine Zarate Fernandez of RTC Branch 76.

De Guzman’s father, National Democratic Front of the Philippines consultant Rafael Baylosis, was arrested in 2018 for illegal possession of firearms, but was released in January after the charges against him were dismissed.

According to Karapatan, most of the more than 500 political prisoners in the country are facing trumped-up charges.

Judge Fernandez, in her eight-page ruling, said the prosecution was able to prove the arrest was valid. She also upheld policemen’s testimonies that a loaded .45-caliber pistol was found inside Maga’s backpack during his arrest on Feb. 22, 2018, in San Mateo.

Maga told the court the evidence was planted.

The warrant, issued by Judge Cesar Bordalba of RTC Branch 34 in Cabadbaran City, Agusan del Norte province, was for one “Marlen Maojo Bartolome Maga” in connection with the killing of a soldier in 2017.

Maga argued that the warrant did not pertain to him because it did not correctly spell his name.

“No way Maoj has been to Agusan,” De Guzman said of her husband.

But the court said: “It was not shown that the police officers were ill-motivated to arrest the accused on trumped-up charges.”

Read Next
DID YOU KNOW: June 6-12 is Linggo ng Kalayaan
EDITORS' PICK
Beyond the Chocolate Hills: A farm-to-table, heritage culinary adventure of Bohol
MyCitiHomes premiers PH’s first 3-star certified BERDE District residential development
‘Crash Landing on You’ couple confirms pregnancy
Enrile contracts COVID-19: ‘To my critics and enemies, I am not going to die yet’
Metro Manila’s COVID-19 positivity rate jumps from 3.9% to 5.9% — OCTA
House energy committee chair Arroyo bats for cheap electricity
MOST READ
Duterte: It was correct for Bongbong Marcos to ‘decline’ presidential debates
Enrile contracts COVID and snipes at critics, foes: ‘I am not going to die yet’
Russia steps up missile strikes on Ukraine as G7 leaders gather
Dennis Padilla answers Leon Barretto’s open letter: ‘Been reaching out to you for 15 years’
Don't miss out on the latest news and information.