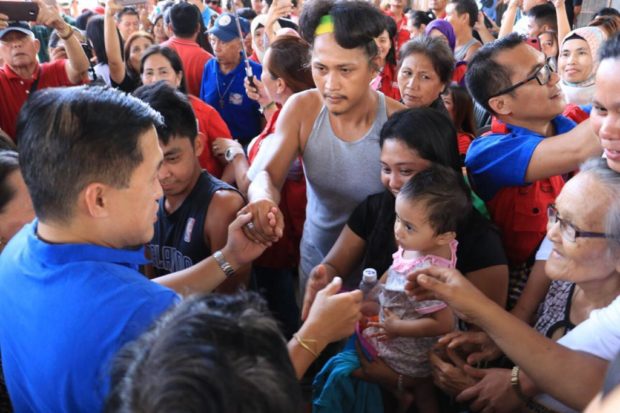 Incoming Sen. Christopher “Bong” Go (left) brings aid to the victims of a fire in Iligan City on May 29, 2019. (Contributed photo)

MANILA, Philippines — Incoming Sen. Christopher Lawrence ‘Bong’ Go went on Wednesday to Iligan City in Lanao del Norte to give aid to 142 families affected by a fire that took place there on May 29.

According to investigators, the fire started on the second floor of a two-story house in Purok Silangang, Barangay Ubaldo D. Laya.

Go brought with him assistance from private entities who shared his advocacy, along with some representatives from the Department of Social Welfare and Development (DSWD), the Philippine Amusement and Gaming Corporation (PAGCOR), and the Philippine Charity Sweepstakes Office (PCSO), and the National Housing Authority (NHA).

The NHA will check on the fire victims’ housing needs.

“There was a lot of assistance provide from both the private sector and the government — from my former colleagues,” Go said, speaking in Filipino. “We will help the fire victims by contributing whatever we can. As I have said before, I will go anywhere in the Philippines to help people and give them solutions to the problems they face.”

Go assured the fire victims that he would prioritize in the Senate the strengthening of fire safety measures nationwide.

“We will intensify information dissemination [on fire prevention],” he said. “We will also review the process of giving permits at the Bureau of Fire Protection. We should ensure that our structures are 100-percent compliant with the Fire Code and Building Code.”

“A lot of fires happen in informal settlements where fire drills are not mandatory,” Go noted.

He also vowed to coordinate with the NHA to give possible housing assistance for all fire victims.

“I hope the NHA could give fire victims a one-year moratorium on their monthly amortization to help them recover,” he said.

Meanwhile, Go assured the Filipinos that he was prepared and already looking forward to starting work in the Senate.

READ: Bong Go bares plans at his proclamation as senator