Suspect in slay of man in Ormoc City classroom charged 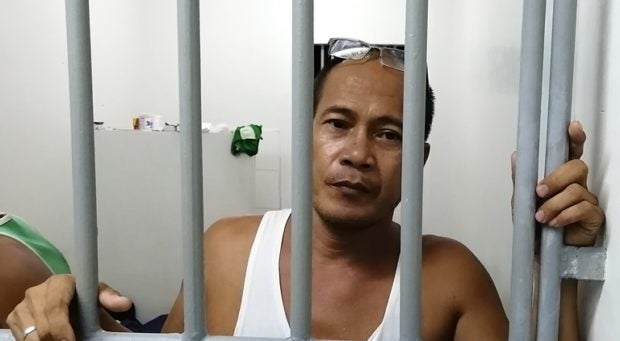 Charges were filed against Ronnie Pocson, the suspect in the killing of a teacher’s husband inside a classroom of the Mabini Elementary School. INQUIRER PHOTO: ROBERT DEJON

ORMOC CITY — Charges were filed against the suspect in the killing of a man inside the Mabini Elementary School classroom here Sunday afternoon.

Ronnie Pocson was presented to the Ormoc City Prosecutor’s Office following his arrest on Monday.

He was charged with murder and illegal possession of firearms.

Sergeant Vince Aguipo, one of the arresting officers, said they arrested Pocson in Sitio Cambinak at 9:50 p.m. on Monday.

He said the suspect did not resist arrest.

In an interview, Pocson said he was forced to kill the victim who had been threatening to kill him.

“I just shot him before he can kill me,” he said,

Initial investigation showed that the victim was helping his wife clean the classroom when he was shot.

The victim’s wife confirmed that her husband had issues and conflicts with the suspect.

The victim was reportedly an asset of an anti-drug agency while the suspect is an alleged security aide of self-confessed Eastern Visayas drug lord Rolando “Kerwin” Espinosa. (Editor: Leti Boniol)