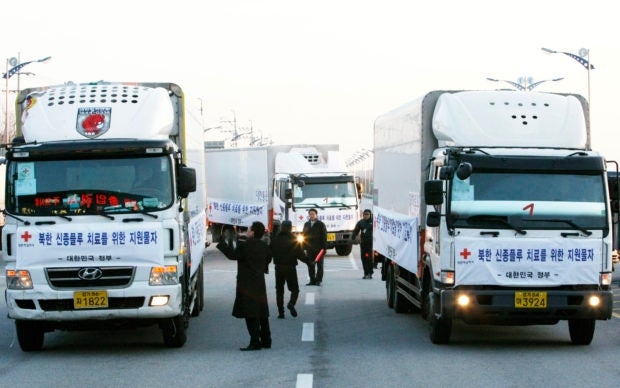 In this December 18, 2009, file photo, South Korean trucks transporting the Influenza medicine Tamiflu and Relenza get ready to leave for North Korean city of Kaesong as South Korean Army soldiers stand at customs, immigration and quarantine office in Paju, near the border village of the Panmunjom (DMZ) that separates the two Koreas since the Korean War, South Korea.South Korea is scrambling to prevent the spread of the highly contagious African swine fever on its pig herds after North Korea confirmed an outbreak at a farm near its border with China. The banner read “Support materials to cure North Korea’s swine fever.” (AP Photo/Ahn Young-joon, File)

South Korea’s agricultural ministry said tblood tests of pigs from some 340 farms near the inter-Korean border conducted through Tuesday came back negative. Hundreds of fences and traps have been installed around the farms to prevent pigs from being infected by wild boars that roam in and out of North Korea.

But the lack of bilateral cooperation renders South Korea helpless in preventing the disease from reaching North Korean farms near the border.  There’s concern that an outbreak in South Korea would deal a significant blow to a massive industry that involves 6,300 farms raising more than 11 million pigs.

South Korea’s Unification Ministry, which deals with inter-Korean affairs, said the North hasn’t responded to proposals for joint quarantine efforts since it reported an outbreak near its border with China to the World Organization for Animal Health, or the OIE, last week. The North said 77 of the 99 pigs at the cooperative farm in Jagang province died of the disease and the remaining 22 pigs were culled.

The outbreak comes as the North has significantly slowed its engagement with South Korea following the collapse of a February summit between North Korean leader Kim Jong Un and President Donald Trump over disagreements for sanctions relief in exchange for North Korea’s nuclear disarmament.

Lee Sang-min, the Unification Ministry’s spokesman, said the North has not separately communicated with the South over the outbreak although the Koreas last year agreed to share information when contagious diseases break out.

“It seems we will have to wait longer for the North’s response,” he said.

African swine fever, which has decimated pig herds in China and other Asian countries, is harmless to humans but for pigs is fatal and highly contagious. There is no known cure or vaccine.

North Korean state media in recent weeks have published several articles detailing the spread of African swine fever across Asia, but none of them so far has specifically mentioned that the disease has reached the North.

“To prevent African swine fever from spreading, it’s crucial to detect and slaughter the pigs infected with the virus at the right time,” North Korean scientist Jon Sung Chil said in an interview published Wednesday on Pyongyang’s official Rodong Sinmun newspaper, which called for an all-out effort by the North’s farming industry and homes to prevent the spread of the disease.

South Korean government believes the North raises about 2.6 million pigs in 14 government-run or cooperative farms. Oh Beom-seok, an official from South Korea’s agriculture ministry, said the South is prepared to provide diagnosis kits, disinfectants and other equipment should the North ask for help.

“We are trying to gain as much information possible from the OIE or North Korean officials there … but so far, there has been no additional report of an outbreak (in North Korea),” Oh said.

The ministry said government workers have caught more than 1,000 wild boars in South Korea for blood tests, which have so far come back negative. While workers plan to test 2,000 more wild boars, the ministry said none of the animals so far was caught in border areas, where a ban on hunting rifles make the animals harder to control.

South Korea’s Defense Ministry, which is monitoring the movement of wild boars through heat sensors installed along the border, said it would be difficult for wild boars to cross over barbed wire fences in the mine-scattered border zone. But government officials say there’s still a possibility that the animals could swim across rivers.

Oh, from the agriculture ministry, said government workers are expanding the range of their quarantine efforts and would finish examining facilities and spraying disinfectants at all pig farms nationwide by next week.

South Korea is also tightening control at harbors and airports, while imposing a 5 million won ($4,200) fine on travelers who fail to report food products containing pork after visiting countries dealing with African swine fever. Repeat offenders can be fined up to 10 million won ($8,470).

The outbreak in North Korea came after the disease in past months ravaged farms in China, where more than a million pigs have been reportedly culled, and also spread to Vietnam, Cambodia, and Mongolia. /kga