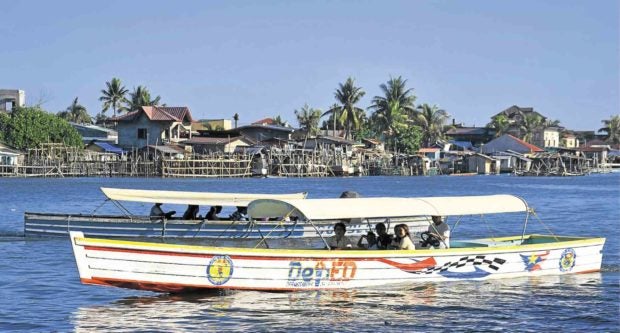 SCHOOL SERVICE Public school teachers in Dagupan City use a boat, donated by the local government to the Department of Education, to cross the Calmay River so they can report to their classes in the city’s five island barangays. —WILLIE LOMIBAO

DAGUPAN CITY, Pangasinan, Philippines — Janela Jane Arce hops into a wooden motorboat every day to join fellow teachers for a 15- to 20-minute trip across the Calmay River to reach their classrooms in the city’s island villages.

At times, especially during the rainy season, Arce and her colleagues would report to their classes dripping wet after surviving the choppy ride.

“Our life as island teachers is an everyday challenge. It’s scary because we have to ride a boat. But we have adjusted [to this situation],” said Arce, adding that she had not considered transferring to schools in Dagupan’s mainland.

The teachers take boats to reach their schools in the island villages of Pugaro, Lomboy, Calmay, Carael and Salapingao, said Maria Linda Ventenilla, chief of the school governance and operations of the Department of Education (DepEd) in the city.

Although most of these schools are accessible by land through the neighboring town of Binmaley, a boat ride is cheaper and faster.

The daily saga of most teachers in nine schools across the Calmay River has pushed them to call on the government to increase their hazard pay and salary.

According to Arce, who teaches at Lomboy Elementary School, she pays a one-way fare of P15 because hers is the nearest school. Those going to Salapingao pay P40.

Joel Moreno, an elementary school teacher at Pugaro Integrated School, said he and six others had to hire a boat for P200 to take them to school. Each passenger pays P30, he said. 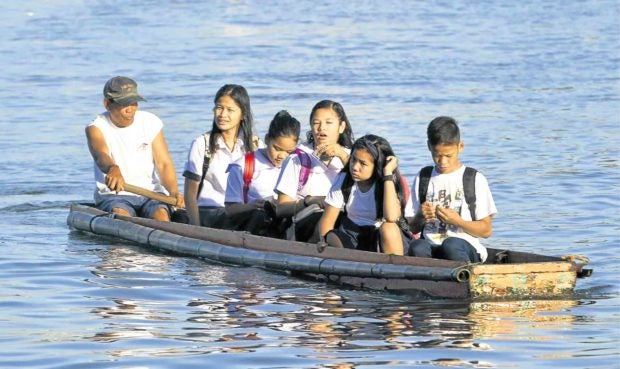 RIVER RIDE Students from Dagupan’s island villages use smaller boats for a 15- to 20-minute ride to the city’s mainland. By land, it will take them 40 minutes to reach the city center. —WILLIE LOMIBAO

“Sometimes, we hire small boats, which are cheaper [as we pay] only P100. But there are times when the water is rough and my companions are scared [to cross the river on small boats],” Moreno told the Inquirer.
Those teaching at Calmay and Carael just take any of the small boats docked at the terminal for a P20 fare.

Moreno said his yearly P30,000 hazard pay was not enough to cover all his transportation expenses.

He said the teachers had experienced traveling in small boats amid heavy rain so they could submit reports to the DepEd division office in the city.

Teachers across the country have been asking for P10,000 salary increase to cope with the rising cost of basic goods and services. The Alliance of Concerned Teachers has been seeking a raise in teachers’ base pay from P20,754 to P30,000.