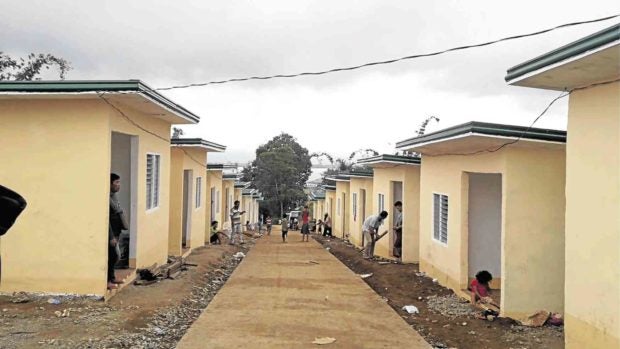 MANILA, Philippines — The National Housing Authority (NHA) has finished only 25 percent of the target number of houses for residents who were displaced when Islamic State-linked armed groups laid siege to Marawi City two years ago.

In a press conference on Tuesday, Roderick Ibañez, chief of the Marawi Project Management Office, said that as of May 31, the NHA had built and turned over 1,763 temporary housing units in two villages.

The agency had set a target of 4,852 temporary housing units and 2,080 permanent housing units that it would finish by March 2020.

He said 1,052 houses were built in Barangay Sagonsongan, while the rest were constructed in Barangay Boganga.

Ibañez said the NHA encountered problems in building houses due to the scarcity of land in Marawi and the difficulty in securing permits to start construction on borrowed property.

While the construction of houses was “not difficult,” Ibañez said: “How can we build houses without land? Most are owned by LGUs (local government units) while some are owned by tribe leaders. We are only knocking on their sense of generosity and patriotism.”

He said residents who used to live in the city’s business center, the ground zero of the five-month fighting between government troops and members of the Maute and Abu Sayyaf groups, would be prioritized in the distribution of permanent shelters.

During the same press conference, Victor Balba, NHA special bids and awards committee chair, dismissed as “completely baseless” the complaint filed against him and other officials of the NHA and the Housing and Urban Development Coordinating Council (HUDCC) over alleged anomalies in the bidding process for the Marawi rehabilitation project.

Last week, Datu Meno Manabilang, a resident of Marawi who was forced to leave the city during the siege, filed the complaint against Marcelino Escalada Jr., NHA general manager; Eduardo del Rosario, HUDCC chair; and Balba in the Office of the Ombudsman.

Manabilang alleged that the contracts for the clearing of debris and demolition of damaged structures in the city’s most affected area (MAA) was improperly awarded.

Balba said he was confident that the bidding process was carried out properly. “All MAA activities underwent proper procurement. We even had COA (Commission on Audit) observers. If there were issues, we would have been cautioned then and there,” he said.

In Mindanao, a Maranao leader expressed disappointment over the COA report that the bulk of donated funds for survivors of the Marawi siege had not reached its intended beneficiaries.

Drieza Lininding, chair of the Moro Consensus Group, appealed to the government to release the remaining donated funds to help displaced residents of Marawi.

Of the P36.92 million total donated funds intended for survivors, only P10,000 had so far been released to the family of someone who was killed during the siege, according to the COA report.

“It is so frustrating to learn that two years after the Marawi siege, about a hundred thousand IDPs (internally displaced persons) are still struggling for their everyday survival,” said Lininding in a statement on Monday. “What’s worse, only one person (had benefited from) the donations supposedly intended to help survivors.”

“While the government assured that the money was still intact, unspent and not pocketed (as these were) kept in banks, it deprived thousands of IDPs whose conditions last year could have been alleviated had the donation been used for their basic needs,” Lininding said.

He said the funds could have been used for the medical and health needs of displaced residents and for documenting the missing and the dead.

Malacañang is looking into an audit report alleging that P5 million intended for Marawi’s rehabilitation was used to fund the hajj pilgrimage of displaced residents in 2018.

Presidential spokesperson Salvador Panelo on Tuesday said he would first check the COA report on the HUDCC’s use of Marawi rehabilitation funds.

“That would be technical malversation if it is true. But we don’t know that yet,” Panelo said, stressing that he had yet to read the COA report.

Earlier, the COA ordered the HUDCC to return P5 million which was allegedly diverted to the National Commission on Muslim Filipinos.

But the COA pointed out that the fund was strictly intended to be used for the recovery, reconstruction and rehabilitation of Marawi. —With a report from Julie M. Aurelio