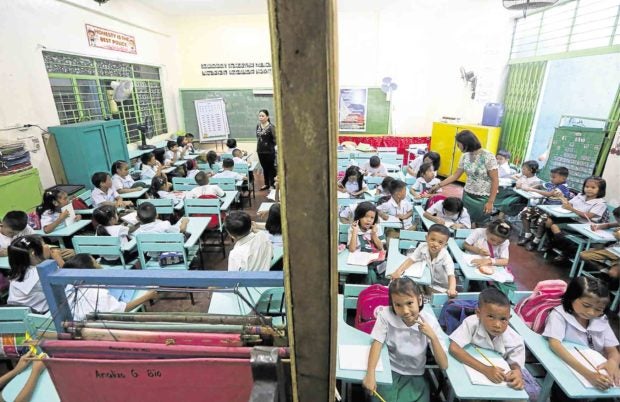 DIVIDE BY TWO As nearly 23 million students pour into 47,025 public schools throughout the country for the opening of classes on Monday, Grade 2 pupils share a room at Rosauro Almario Elementary School in Tondo, Manila, with only a blackboard separating them. —MARIANNE BERMUDEZ

The public school — with a gleaming new building with 21 fully air-conditioned classrooms, cyberlaboratory with 26 iMac computers and a “Hope Center” for 24/7 counseling — was the ideal backdrop for her message to the public: “There is good news in education.”

But the Taguig school did not reflect conditions in the rest of the country’s 47,000 public schools, into which nearly 23 million students squeezed themselves, in an annual deluge that though predictable the government seemed to have never had the capacity to prevent.

At Juan Sumulong Elementary School in Antipolo City, about 15 kilometers from Taguig, up to 90 Grade 2 students squeezed into small classrooms separated by thin plywood dividers, some of which teachers paid for with part of their midyear bonus.

Last year, the lack of space in the school was so acute that classes for the 9,000 students had to be divided into three four-hour shifts.

This year, however, the shifts were down to two, said Manolito Resaba, president of the Antipolo Public School Teachers Association.

Briones, recognizing gaping and long-standing disparities among public schools, promised that the Department of Education (DepEd) would intensify its efforts to make all schools equal.

“But this is an endeavor, objective and battle [that] is fought not just by the DepEd but by the entire country,” she said. “The quality of public education is largely shaped by the quality—and quantity—of its support.”

Briones said the agency had started implementing a “last mile program,” and was taking an inventory of schools around the country that needed to catch up.

Many of these schools were at least an hour’s travel from town centers, or had been devastated by natural disasters, she said.

The Alliance of Concerned Teachers (ACT) has flagged such schools in Eastern Visayas, which was devastated by Supertyphoon “Yolanda” (international name: Haiyan) in 2013.

“Those struck by Yolanda in [Eastern Visayas] have been holding all their classes in plywood classrooms since 2014 with walls that are too short, it hardly touches the uncemented ground,” ACT secretary general Raymond Basilio said.

Education Undersecretary for Finance Annalyn Sevilla also said many schools in Porac, Pampanga province, that were damaged by a powerful earthquake in April remained unrepaired.

Students from those schools were transferred to temporary learning spaces in the meantime, she said.

Sevilla said the DepEd had spent more than half of its P2-billion quick response fund to deal with such situations.

More than 27 million students, in both public and private schools, are enrolled in the K-12 program—from kindergarten to senior high school—this year.

Officials had been preparing for the opening of classes for months, and continued to insist on Monday that the schools were sufficiently prepared.

Teacher-to-student ratios have improved, the DepEd said, but there are 33,000 vacancies for teachers this year.

“We are humans. Humans learn from whatever deficiencies there are,” Briones said. “Each opening school year we learn new things.”

Resaba said teachers paid the price when schools were not properly funded.

The sourcing of materials for the dividers at Juan Sumulong Elementary School was overseen by teachers, many of whom also paid workers to build the classrooms a couple of weeks before classes started.

Some, like Grade 4 teacher Eva Rivera, were able to secure donations from incoming parents.

“Some of our buildings are still under construction,” she said. “So this is the best thing in the meantime.”

In Floridablanca town, Pampanga, Aeta children whose school was damaged by the 6.1-magnitude earthquake on April 22 attended classes in makeshift classrooms on a viewing deck in Barangay Nabuklod.

In Ilocos Norte province, provincial schools division superintendent Vilma Eda said that except for the lack of classrooms in some urban areas the opening of classes on Monday went smoothly.

The classroom shortage forced the division of classes into shifts—6 a.m. to noon and noon to 6 p.m.—at West Central Elementary School in Dagupan City, Pangasinan province.

In the Bicol region, schools had to use temporary spaces and divide classes into shifts because of delay in the construction of new classrooms and an increase in the number of students.

At Daraga National High School in Daraga, Albay province, students squatted on the floor on the first day of classes.

“Some of them were told to bring their own chairs. Tomorrow I will bring my own lapel microphone to manage the class,” English teacher Maybelle Marco said.

Classes were also divided into shifts in Cebu City to make up for the lack of classrooms.

At Cebu City Central School, 11 of 16 Grade 1 classes would be held for only half a day this year due to the classroom shortage.

Principal Lyra Illaga said a new schoolbuilding was under construction and when completed, it would ease the situation.

In Iloilo City, the classroom shortage eased this year with the completion of new schoolbuildings in time for the opening of classes, according to Victor de Gracia, DepEd assistant director for Western Visayas.

The teacher shortage was also reduced with the hiring of new teachers, he said.

Students at New Labangan Elementary School in Labangan, Zamboanga del Sur province, were not as lucky. They sat in makeshift classrooms without walls as classes opened on Monday.

The DepEd and the Department of Public Works and Highways were aware of conditions in the school, but had yet to do anything to make things better, according to school head Honey Corpus.—With reports from Tonette Orejas, Leilanie Adriano, Gabriel Cardinoza, Villamor Visaya Jr., Ma. April Mier-Manjares, Dale Israel, Nestle Semilla, Nestor Burgos Jr. and Leah Agonoy

Read Next
Senate approves tobacco tax bill
EDITORS' PICK
A laptop that maximizes your WiFi so you can maximize your productivity
Powered by style, innovation and passion
In Borongan, nuns play hoops (not mahjong)
PH resumes talks with China on Chinese-funded transport projects
House energy committee chair Arroyo bats for cheap electricity
Why Tagle is a leading papal contender
MOST READ
Why Tagle is a leading papal contender
Arjo Atayde reveals proposal to Maine Mendoza was ‘more than a year’ in the making
Iza Calzado asked self upon learning she’s pregnant at 40: ‘Is this what I want?’
Zubiri on SRA mess: Shameful, disgusting
Don't miss out on the latest news and information.