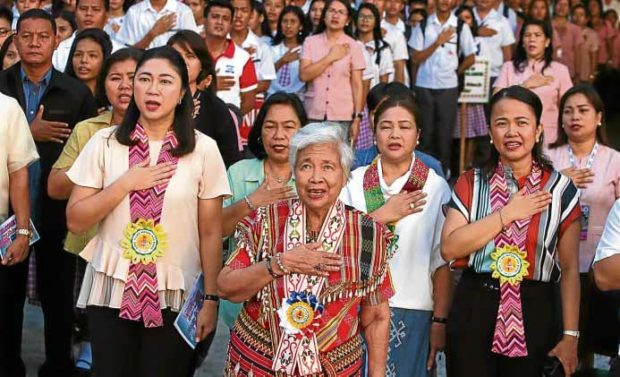 CLASS OPENING Education Secretary Leonor Briones leads the flag-raising ceremony at Signal Village National High School in Taguig City on Monday, the start of a new school year. Briones says any pay raise for teachers should be accompanied by an increase in the salaries of all government employees. —MARIANNE BERMUDEZ

MANILA, Philippine — President Rodrigo Duterte is working on the appeal of public school teachers for a much-deserved salary increase, Malacañang said on Monday as a new school year started.

The President has told his economic advisers to look for sources of funding for the raise, presidential spokesperson Salvador Panelo said.

“Our economic managers are doing everything to see how things can be done,” Panelo said.

‘Look at the forest’

But Education Secretary Leonor Briones had no encouraging words for public school teachers, who have been pressing President Duterte to make good on his promise of raising their salaries.

The teachers are asking for a raise of P10,000 for them to catch up with rising prices and the cost of basic services.

Speaking at a briefing in Signal Village National High School in Taguig City on Monday, Briones poured cold water on the teachers’ demand, telling them to “look at the entire forest of public service.”

Any pay raise for teachers should be accompanied by an increase in the salaries of all government employees, otherwise similarly underpaid professionals like nurses would be further disadvantaged, Briones said.

“No man is an island,” Briones said. “We are a very important sector, beloved by all, but at the same time we have to love everybody else.”

The Department of Budget and Management (DBM) had opened a study of the pay of all public sector employees, as the last of the salary increases under former President Benigno Aquino III’s Executive Order No. 201 took effect this year, Briones said.

Teachers’ groups are wary of a salary increase tied to a government-wide pay increase, not wanting a repeat of their experience under EO 201.

The measure gave them a raise of P500 for four years, a measly amount that was quickly eroded by rising prices.

By comparison, it raised the President’s salary by 233 percent and legislators’ pay by 186 percent.

“Some 800,000 teachers suffer due to very low pay that is unable to afford them a decent life,” Alliance of Concerned Teachers (ACT) secretary general Raymond Basilio said on Monday.

“Such abandonment of the very backbone of the public education system in the country vividly reflects how the state values education, hence our stance that teachers’ salaries are the most pressing issue this school opening,” he added.

At the briefing in Taguig, Briones claimed that she came from a “dynasty of teachers” and that she understood the public school teachers’ plight but had to think of other government sectors and private school teachers, who were paid even lower than their counterparts in state-run schools.

“Another challenge is the migration of teachers from the private to the public sector,” she said. “Think of the [private] schools in your hometown, ask yourselves if they can survive. This is a world of competition.”

The President had repeatedly promised public school teachers since 2015 that their salaries would be raised or even doubled.

But each time, those promises were opposed by his economic managers, who had brought up budgetary concerns echoed by Briones on Monday.

“We should ask our citizens, are they ready to contribute P150 billion more?” Briones said, referring to additional taxes.

But ACT Rep. France Castro has argued that funding for a pay raise for teachers does not mean additional taxes but collecting taxes more efficiently to build up the fund for the increase.

Teachers have also slammed the “double standard” at play, saying the government quickly found funds to double the salaries of the police and the military.

“Secretary Briones is clearly detached from reality,” said Basilio, who pointed out that the education secretary was the second highest-paid Cabinet member. “Her statements speak of her embarrassing lack of empathy to and shameless contempt of teachers.”

Annalyn Sevilla, undersecretary of education for finance, said on Monday that as the Department of Education waited for the results of the DBM study, it was working to fully implement the benefits under the 53-year-old Magna Carta for Public School Teachers.

“For the first time in the history of the DepEd budget, we have an annual medical exam fund,” Sevilla said.

The 2019 budget also included a provision providing all teachers with a P1,000 allowance on World Teachers’ Day every Oct. 5, she said.

She added that education officials were talking to the DBM about changes to the promotion system in the department, where teachers who have rendered decades of service sometimes retire without moving up the ladder.

Making it easier for them to be promoted would make their pay rise faster, Sevilla said.