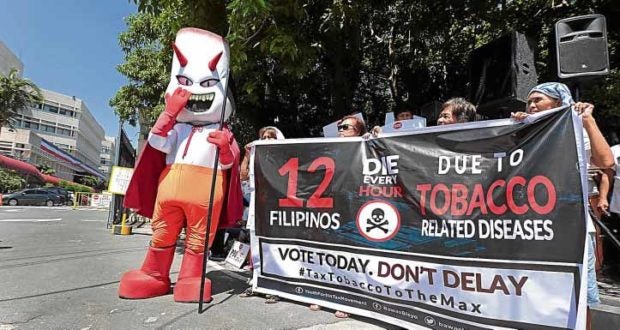 SENATE PICKET Members of the Philippine Medical Association and the Philippine College of Physicians and health advocates urge senators to approve the bill increasing taxes on tobacco products as they picket the Senate on Monday. —GRIG C. MONTEGRANDE

MANILA, Philippines — Smokers may find another reason to quit after the Senate approved on Monday night a measure that would impose an excise of up to P60 per cigarette pack, legislation that the Duterte administration openly supported to help fund the universal health care law.

“Congratulations to our health and financial officials. You will now have funds for the universal health care law,” Senate Majority Leader Juan Miguel Zubiri said after the chamber voted unanimously to pass the bill on second and third reading.

Under the measure, the excise on tobacco will go up in the next four years, starting with P45 per pack on Jan. 1, 2020.

The 17th Congress has two session days left to tackle the proposed tobacco tax increase on the conference committee and to ratify the reconciled version of the Senate and the House of Representatives for President Duterte’s signature. Congress adjourns on June 7.

“For this to be passed and enacted into law, we will ask the House to adopt the Senate version,” said Senate President Vicente Sotto III.

“So we have to be very careful with the Senate version and try to incorporate already all the ideas, not only from us, but also from the House,” he added.

The House approved its version, House Bill No. 8677, in December last year.

It would increase the excise tax by P2.50 per pack yearly until it reaches P45 per pack in 2022, and by 4 percent annually thereafter.

The World Health Organization (WHO) pointed out on Monday that raising the tax on tobacco products to P60 would not only provide the government with funds for health care programs but also help save the lives of some 460,000 people .

WHO representative to the Philippines Gundo Weiler said there was “no rational argument” to make cigarettes cheap given that an increase in tobacco tax would put the country in a “win-win-win” situation.

“It’s a win for the economy because we know that a healthy society is more productive. We know that individually, especially for the poorest segment of society, increasing [the price of] tobacco will actually help them save money. They spend less on cigarettes, they will spend less on unnecessary health care,” Weiler said.

He said it was also a win for the government “because it is raising important funds for UHC (universal health care).”

Based on the WHO estimate, raising the tobacco tax to P45 a pack would prevent the deaths of 300,000 people from smoking-related diseases.

Duque warned that if no significant tax rate was imposed, the country was in danger of seeing a surge of 250,000 new smokers annually.

He added that the Department of Health would also have a hard time curbing the more than 117,000 annual deaths due to smoking-related diseases.

Before the Senate version was passed, various amendments introduced by senators slowed down its approval.

Sen. Risa Hontiveros noted that health officials and antitobacco advocates deemed it more appropriate to use the term “electronic nicotine delivery system,” or ENDS, to refer to vapes and other similar products instead of the word “vapor products.”

“That’s because these products do not emit water vapor, but aerosol,” Hontiveros said.

But both Recto and Sen. Sonny Angara, the main sponsor of the measure, said the terms “heated tobacco products” and “vapor products” were actually more encompassing and that ENDS was just one of the products regarded under this definition. —With a report from Jovic Yee