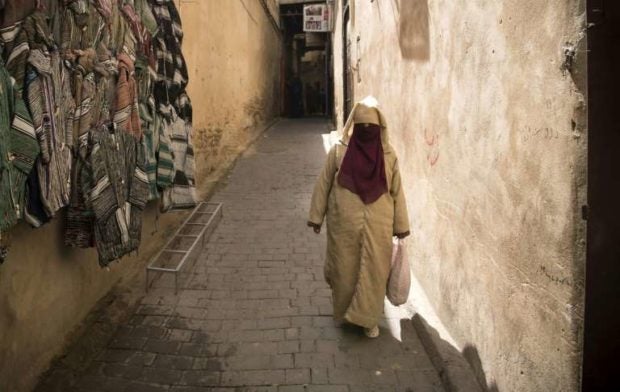 In recent times the imperial city of Fez has been overlooked by tourists in favor of Marrakesh, but now Morocco’s “spiritual” capital is bustling with visitors due to major renovations and low-cost flights.

“It is an open-air museum, with the largest pedestrian zone in the world and its 10,000 alleyways,” said Yassir Jawra, vice president of the Fez tourism commission.

“Fez is the spiritual capital of Morocco, famed for its culture and its age-old handicraft work,” he added.

Since 2013, more than one billion dirhams (about P5 billion) of investment have been poured into Fez to restore the 9th-century walled medina and develop tourism.

The medina, home to the world’s oldest working library, was listed as a UNESCO World Heritage Site in 1981 for its “outstanding universal value.” 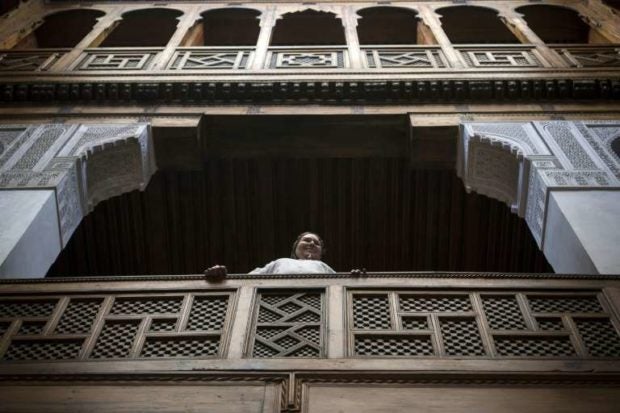 Guardian of priceless treatises in Islamic studies, astronomy and medicine, the library is nestled in the maze of narrow and dark alleyways which tourists and donkey-drawn carts can struggle to navigate.

Like many monuments, it has been renovated after the authorities in the late 1980s sounded the alarm in a report saying that more than half of the buildings in the medina were crumbling and 10% were threatened with ruin following years of neglect and a lack of public funds.

Patrician palaces with their secret gardens and terraces, elegant fountains and ancient caravansary, or inns, are among the jewels lying there to be discovered.

According to Fouad Serrhini, head of the Agency of Development and Restoration tasked with rehabilitating the medina, “thousands” of buildings and monuments have been saved from ruin since 2013.

“They were chosen according to their state of degradation and how urgently the work was needed,” he said. 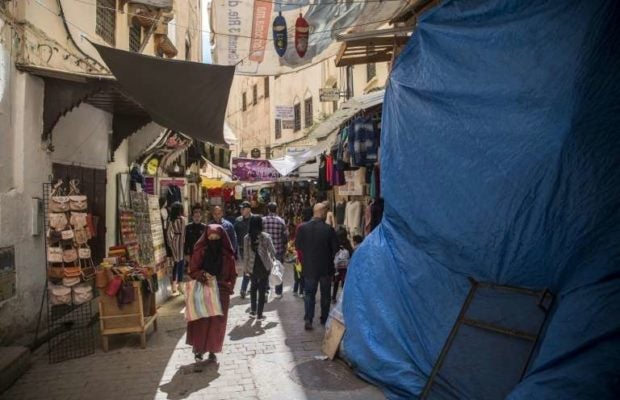 Tourists and locals walk in the medina in Fez, listed as a UNESCO World Heritage Site in 1981 for its “outstanding universal value.” Image: AFP/Fadel Senna

In mid-April, King Mohammed VI visited Fez to inaugurate some buildings that have been renovated and launch the second phase of the rehabilitation program.

Following his visit, authorities issued a report insisting that the rehabilitation work respect the medina’s “authenticity” and “original architecture”.

“The ancient medina is a live treasure, hidden and secret, which cannot be taken lightly,” said Salim Belghazi, a 33-year-old who has transformed his 14th-century riad, or traditional family home, into a private museum.

Belghazi, who hails from a wealthy background, said he hopes that despite the transformation, Fez will maintain its soul.

Meanwhile, tourists are flocking to Fez, where the regional Fes-Saiss airport has undergone an expansion to accommodate the growing number of visitors and low-cost flights mainly from across Europe.

But Marrakesh remains the country’s top tourist destination, with more than two million arrivals in 2017.

Tourism is a major source of revenue for Morocco, which received more than 12 million visitors in 2018, according to official figures.

Abderahim Belkhayat, head of a regional body of artisans, said the influx of visitors to Fez “benefits” craftsmen, noting that three-quarters of the medina’s residents earn a living directly or indirectly from the sector. 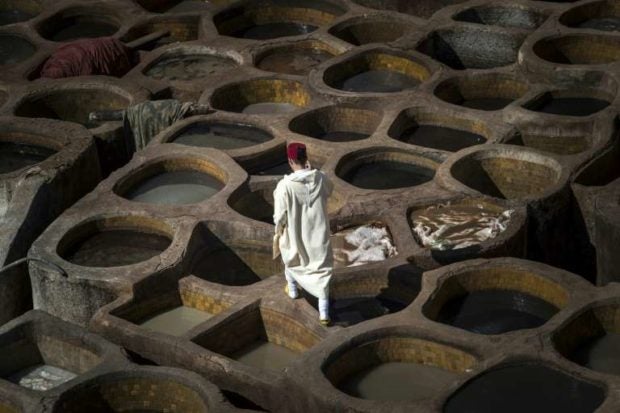 Tourists, their noses covered with mint leaves to ward off the stench, congregate on terraces overlooking the tanneries to snap pictures of the men working below, using the same methods as their ancestors did. Image: AFP/Fadel Senna

“Local authorities have mapped out a “vision” to revamp the sector by giving it a “new look” in order to produce “high quality” crafts,” Belkhayat said.

A 2005 official report indicated that in the long term, authorities hope to transform the medina into a “showcase” of handicrafts while the workshops themselves would be relocated outside the walls.

So far, 6,000 potters and brass and copper workers have been moved into zones with modern infrastructure and tanners are expected to follow suit in a separate location.

The idea is to rid the medina of the cacophony of noise emanating from brassware and potter workshops as well as the pungent odors that rise from the ancient tanneries, the latter a “must” stop on the tourist circuit. 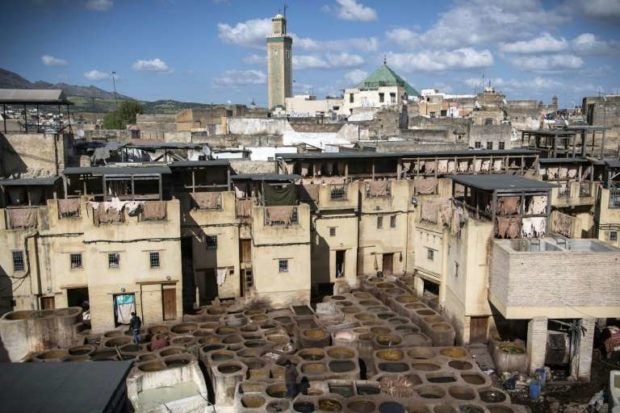 A view of the tannery in the 9th-century walled medina in the ancient Moroccan city of Fez. Image: AFP/Fadel Senna

Tourists, their noses covered with mint leaves to ward off the stench, congregate on terraces overlooking the tanneries to snap pictures of the men working below, using the same methods as their ancestors did.

The tanners stand almost knee-deep in large vats containing quicklime, cow urine, salt and water to clean the hides, which they will later soak in pigeon poop and water before the dying process can begin.

The smell is always nauseating.

But the sight seems to delight the visitors and the end result, such as leather belts and bags sold in the boutiques, proves popular with buyers. HM/JB

Istanbul’s musical ferry can be a soulful experience