Istanbul's musical ferry can be a soulful experience | Inquirer News

Istanbul’s musical ferry can be a soulful experience 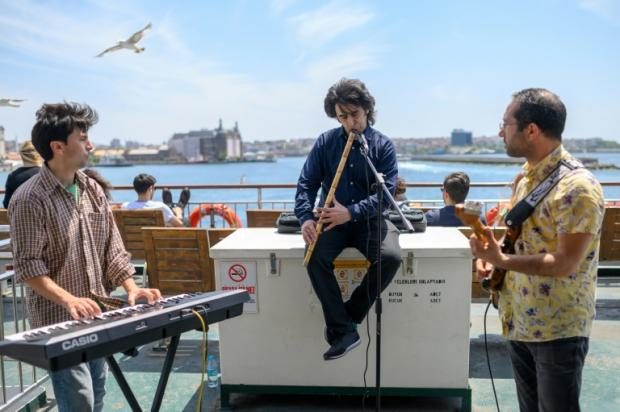 It’s already one of the world’s most original commutes, the ferry trip between Istanbul’s European and Asian sides give a daily quarter of a million passengers unforgettable views on their way to work.

Now the Turkish city is offering music to offset the seascape and for the amateur musicians providing it, it’s a chance to make some crucial money in difficult economic times.

The musicians work hard to ensure their music reflects Istanbul’s unique position as a city straddling East and West.

“We travel back and forth between the two continents and we try to express emotions sparked by the two cultures, a kind of fusion, a synthesis,” Oguzhan Erdem, one of the ferry musicians, told AFP.

Until recently, ferry musicians played without authorization but city authorities realized they were missing an opportunity and launched a project to make them an official part of the experience.

Erdem plays the Turkish ney reed flute, an instrument traditionally used by Sufis, a mystical branch of Islam, while his bandmate plays a Western-style keyboard.

“It’s merging the East with the West,” said Erdem.

Ferry musicians rely on the tips to make their living and it has offered a lifeline for those struggling with Turkey’s economic downturn.

Erdem, who also plays in the streets and with his band “DoguBang,” failed to find work as an interior designer.

“The job market is so bad. When I was brooding over what I will do, I saw a young girl singing in the ferry one day and asked myself ‘why don’t I give it a try,'” he said.

He has now been playing the ney on ferries for the past nine months.

Istanbul is full of buskers, both Turkish and foreign, particularly on its busy shopping hub of Istiklal Avenue.

Eren Koc who plays the keyboard is a sculptor by profession and found himself playing on the ferries after visiting the city for one of his exhibitions.

“There are interesting moments on the ferries when applause suddenly breaks out or some people stand up and dance, it is like being in a movie,” he said.

For some commuters, it can be a truly emotional experience after a hard day at work.

“The tunes speak to my soul and rest my mind. It takes me back to the past,” said Nimet, with tears in her eyes as she listened to the ney.

“Like the water flowing in the Bosphorus, it is triggering a flow of emotions inside,” she wistfully said.

Erdem is happy to inspire people.

“In the evenings people leave work and return to their home. They empty their mind, reach a kind of serenity. I see many sleeping in peace. This is a source of great pleasure for me,” he said.

Tunc Baydar, the coordinator of the project for the municipality, said musicians playing in an unauthorized fashion had previously caused problems for the crew and security personnel.

“We kicked off the ‘Music on the Ferry’ project in 2016 so we could create an environment for those musicians to play in the ferry with permission more comfortably,” he said. “We have turned the ferry musicians into part of our brand.”

Baydar said that they were always on the lookout for new talented musicians.

“We watch their videos on social media. We’ve even begun recruiting conservatoire students.”

Many world capitals have great buskers and some have even become megastars like Ed Sheeran, but few cities offer as stunning a backdrop.

“We listen to music in the metros in Europe but it’s so beautiful on the sea,” said Berker Colak, a tourist from Germany who came to Istanbul with his fiancee.

“The seagulls and the music create a really authentic ambiance, a real harmony.” HM/JB

Istanbul to unveil new airport, seeks to be world’s biggest