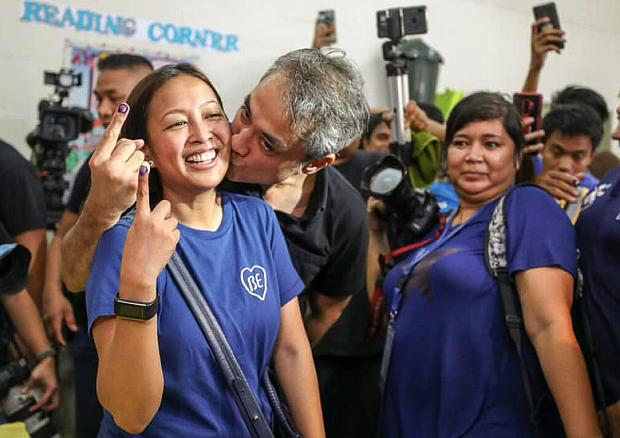 Re-electionist Makati Mayor Abigail Binay gets a kiss from husband Luis Campos shortly after casting their votes on Monday, May 13, 2019. (Photo from Binay’s Facebook account)

MANILA, Philippines — Going into her second term, Makati Mayor Abby Binay hopes her city can start to heal and rebuild.

“And hopefully starting today, June 1, we can start healing, we can start rebuilding because what we need is a united Makatizen. Dito po uumpisahan natin ngayon na tayo po ay magkaisa,” Binay said during her victory party on Makati Avenue in Makati on Saturday.

[We went through a lot. You saw it earlier in that video. Even the men cried because it was tiring. It has been an emotional rollercoaster.]

Binay said she launched her oath-taking and victory party on Makati Avenue, considered a center of happiness.

[We will put up a landmark here. We chose to stage our celebration here on Makati Avenue because Makati Avenue is a center of fun and happiness. And for the first time, I won in Barangay Poblacion.]

Many entertainment establishments are located in that part of Makati Avenue within the jurisdiction of Barangay Poblacion.