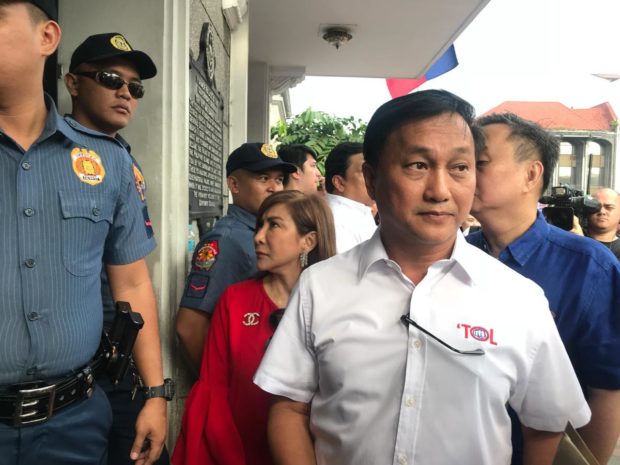 MANILA, Philippines — Senator-elect Francis Tolentino broke his silence on Saturday on the issue of the Senate leadership, saying he would abide by the decision of his party, the ruling PDP-Laban.

“I just arrived today from Jerusalem, Israel. I will abide by the decision of my party — PDP Laban/Hugpong,” Tolentino said in a text message.

“And I have my highest respect for Senator Sotto,” he added, referring to Senate President Vicente “Tito” Sotto III.

Tolentino issued the statement when sought for comment on Sen. Panfilo Lacson’s latest disclosure that he was allegedly the one urging Sen. Cynthia Villar to challenge Sotto’s leadership.

Pressed for an answer, Tolentino said: “As I said after the proclamation, I went on a pilgrimage to the Holy Land and just arrived.”

As to the PDP’s decision on the Senate leadership, Tolentino referred the matter to the PDP-Laban president, Aquilino “Koko” Pimentel III.

“I just arrived today from Jerusalem, Israel and haven’t caught up with the latest news,” Tolentino said.

“Whatever the case, I will abide by the decision of my party — PDP-Laban/Hugpong. I have my highest respect for Senator Sotto,” he stressed.

Lacson earlier said the information that Tolentino was egging on Villar to run for Senate President supposedly came from Senator-elect Imee Marcos.

And this was mentioned to him by Sotto, who got a text message and apology from Marcos for saying she would support Villar, her party mate in the Nacionalista Party, in case of a possible Senate leadership change.

[She said it was a misunderstanding. The only reason she mentioned it was because Senator Villar is her party mate. So when she was asked if she would support Senator Villar, it would have been awkward if she had said no.]

[So she apologized to the Senate President and said it was just a misunderstanding. And she said the one who talked to Senator Villar was Senator-elect Tolentino, who was the one really pushing her to take a chance and go after the position because she might win. But that’s apparently just a plan.]