A 13-year-old boy from Colorado has gotten a new chance to have a new kidney after his teacher adopted him.

After learning that Damien was living in a hospital because he had no home, his teacher Finn Lanning decided to go above and beyond his duty as an educator.

Damien was born with the kidney disease focal segmental glomerulosclerosis (FSGS) and has been moving around in foster care, which has made dealing with his condition more difficult, the Denver7 reported on May 24. 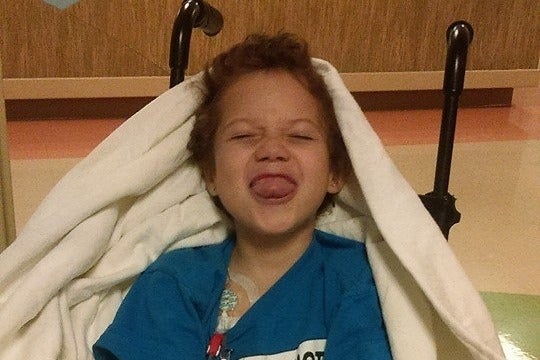 Without a new kidney, Damien has to do a daily 12-hour dialysis.  Image: GoFundMe/Finn Lanning

While waiting for a kidney transplant, Damien needs to go on dialysis for 12 hours every day to clean his blood, and requires a CPAP machine for his sleep apnea (temporary cessation of breathing during sleep).

However, the relative struggled with caring for Damien, and later in the year he was back in county custody. This left the teen in the hospital for over three months, and he was removed from the transplant list because he did not have stable housing.

Lanning thought of how he could help his student when Damien told him he had to stop schooling because he was going to live in the hospital.

“It’s challenging as a teacher to show up and do everything you can for your students,” he told Denver7. “But when one of those students is dealing with something exceptional, it’s hard to look the other way.”

He decided to take Damien under his care and it has now been months since the teen has been able to get his own room, as well as his own math tutor and caregiver. He is also completing a foster care certification.

Lanning said that he has undergone training to properly care for someone with Damien’s condition, which meant time off work. Part of that special care is looking after Damien’s restrictive diet, which can cost $200 (P10,400) a week.

The two are also in the process of moving to a larger apartment that can better fit the teen’s medical equipment and furniture needed for medical care.

Lanning currently does not have financial assistance so he has set up a GoFundMe page for Damien’s medical needs. The amount raised is now $59,108 (around P3 million) as of this writing.

One of the most important things about Damien having a permanent home is getting back on the transplant list. In May, the teen met the directives to be eligible for a new kidney.

Later in the month, they received a call about a match from a deceased donor. Lanning helped Damien prepare for surgery, only to learn that it was a damaged kidney. It was a blow to them, but they still have hope.

In the meantime, the two have received an outpouring of support online, with people on Facebook and on GoFundMe offering funds and inquiries on kidney matches.

At the end of the day, Lanning hopes Damien can still enjoy his childhood. He told Denver7 that Damien wants to be a chef and cannot wait to get out of his restrictive diet.

He promised on GoFundMe that additional funds would be used for cooking classes and a family vacation when he heals from the transplant.  Niña V. Guno /ra

Within 27 years, woman receives kidneys from father and brother